WeWork will pay €290m to Irish landlords over 10 years 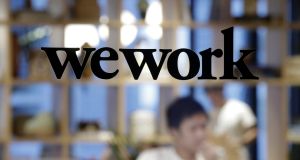 Multinational office landlord WeWork could pay more than €290 million in rent to its Irish landlords over the next decade, an analysis of its business in the Republic shows.

WeWork ditched controversial plans to float on the US stock exchange earlier this year, and subsequently ousted co-founder Adam Neumann as chief executive.

Colm Lauder, analyst with Irish stockbroker Goodbody, says in a note that his company calculates that WeWork has committed to pay rent of €26 million a year.

He adds that to the first potential break point in the contracts, this could amount to total rent obligations “of over €290 million over the coming decade”.

WeWork leases properties and sublets offices to businesses and individuals. The company sells itself on the basis that it tailors space to a particular enterprise’s needs, and so can cater for smaller and larger organisations.

The US company has offices in Charlemont Exchange, North Wall Quay and Iveagh Court and 5 Harcourt Road.

It recently announced that it was taking space in Central Plaza, the old Central Bank of Ireland headquarters on Dame Street in Dublin, which is being redeveloped by US property player Hines.

“This is the equivalent of just 1.4 per cent of the square footage of the overall Dublin Grade A office market (or 2.7 per cent of the total Grade A central business district office space),” Mr Lauder notes.

WeWork’s decision to axe flotation plans and Mr Neumann’s exit have made lenders and investors cautious, the analyst says.

He points out that the market in Dublin could contain potential impact of any of WeWork’s difficulties on its Irish operation.