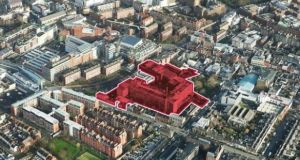 Turnover in the development land market looks set to exceed the €1 billion threshold again this year. According to Cushman and Wakefield, it is likely that sales could come near the €1.39 billion recorded in 2018.

Its latest figures show turnover in the year to the end of September exceeded €820 million, down 12 per cent on the same period in 2018, but with further sales expected at the end of this year.

According to the property company’s research, the housing shortage continues to fuel sales of residential development sites. Its figures indicate that such sales account for 62 per cent of all development land turnover in the year to date. About €513 million has been spent in this space so far in 2019.

The latest figures show €320 million in residential land transactions were carried out in the third quarter across the Greater Dublin Area and the regional centres of Cork, Limerick and Galway.

The largest development land transaction in the third quarter was the sale of the former DIT Campus on Kevin Street, which was bought for €140 million by Shane Whelan’s Westridge Real Estate.

Another notable transaction was the sale of an eight-acre site at Gort Muire, Dundrum, acquired for a reported €35 million by Lioncor Developments. The site is expected to accommodate 450 apartments.

Development land for commercial and mixed-use purposes absorbed approximately €301 million worth of turnover over the nine months to the end of September, although this figure is inflated by the DIT Campus deal.

“Projects which have been de-risked by good asset management and securing the optimum planning permission are particularly sought after, and are currently attracting a strong premium.”

1 Will your boss let you work long-term from home – or from abroad?
2 House asking prices rebound but will likely fall again - MyHome
3 Revolut shifts regulation of Irish customers to Lithuania
4 AA Ireland bought by Olivier Sarkozy-led fund for over €200m
5 Google tells workers to return to country where they are employed
6 Ryanair tells Minister it will close Cork and Shannon unless EU travel plan is adopted
7 Plans for €2bn Dart expansion lure Bombardier to Dublin
8 Subway bread too sweet for the Irish tax authorities
9 Only half the homes needed this year will be built, construction event told
10 Virgin Media unveils new entertainment platform
Real news has value SUBSCRIBE