An Post considers plan to relocate HQ from GPO to Clerys 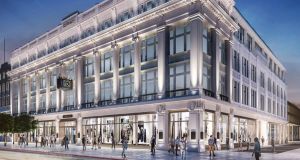 Clerys Quarter: one of five potential locations An Post is said to be considering in advance of the commencement of an extensive refurbishment of the GPO

Clerys, which is in the process of being redeveloped currently by Paddy McKillen jnr’s Oakmount as a major mixed-use scheme to be known as the Clerys Quarter, is one of five potential locations An Post is said to be considering in advance of the commencement of an extensive refurbishment of the GPO.

The company is also understood to have looked at the possibility of moving its headquarters to the Dublin docklands, with Ballymore’s Dublin Landings scheme, the Exo Building at Point Village and Bennett Construction’s North Docks offices all said to be under consideration. Dublin Airport Central, the major new office development currently under construction on the Dublin Airport campus, is also said to be among the locations being looked at by An Post.

While a spokesman for An Post declined to comment on the matter, a survey conducted by the company of its 900 GPO-based staff showed a strong preference both for remaining in the building which famously served as the headquarters for the 1916 rising, and for a city centre location. That desire to remain in Dublin city centre would appear to give Clerys Quarter an advantage over the four other properties An Post is said to have considered in advance of issuing a formal public request for proposal.

Commenting on that process, An Post’s spokesman said: “This will enable an expert group to fully assess all available options in order to make a fully informed decision. It is planned to relocate to an alternative, modern headquarter building, on either a temporary or permanent basis, by the fourth quarter of 2020. An Post will continue to work with its group of unions throughout the process.”

Asked to comment on the company’s reasons for relocating from the GPO, the spokesman said: “The office accommodation at the GPO, a listed building, has not been fully refurbished since the 1980s. The fabric of the building requires extensive mechanical and engineering repair works as well as total interior redesign to make it fit for purpose as a modern headquarters for An Post.”

GPO staff have been registering an increasing number of complaints in relation to the building citing difficulties with plumbing, temperature control, overcrowding and air quality, the spokesman noted.

The GPO’s public post office and GPO Witness History Museum will continue in their current location regardless of An Post’s final decision on the location of its headquarters.