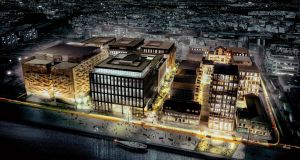 Nama has secured just over €42 million from the €205 million sale by Ballymore and its Singapore-headquarterted partners, Oxley, of two blocks at Dublin Landings.

The State agency’s share of the proceeds from the sale to the Central Bank of blocks 4 and 5 at the Dublin docklands scheme was disclosed in a recent announcement Oxley released to the Singapore stock exchange.

In a statement issued on October 24th last, the company confirmed its subsidiary, Oxley Docklands Quay Two, had completed the the deal for the buildings at final sales prices of €98.6 million and €106.5 million respectively. Oxley said it had received 79.5 per cent (€163,054,500) of the sale’s overall €205,100,000 proceeds while Nama subsidiary, National Asset North Quays DAC, had received the remaining 20.5 per cent (€42,045,500) balance. The €205 million paid by the Central Bank for the properties does not include value added taxes.