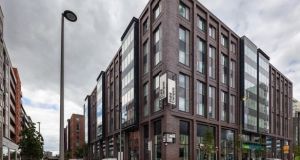 The Point Campus has 966 bed spaces distributed across two blocks

The owners of Ireland’s largest off-campus student accommodation complex have marked its value down by 6 per cent to reflect the impact of the Covid-19 pandemic on the sector.

Having paid a net purchase price of €142.26 million to acquire the Point Campus in December 2019 from BlackRock Real Estate and the O’Flynn Group, Deutsche Bank subsidiary DWS have now ascribed a net value of €134.61 million to the property.

The new and lower valuation was recorded with the sale of the complex by the German-headquartered investor on December 17th last to one of its own funds, the Grundbesitz Europa ICAV.

Asked for comment on the matter, a spokesperson for DWS said: “We regularly value our assets on a mark-to-market basis, and despite valuations across the entire student housing sector being impacted in the short term by the current global pandemic, we are confident that the mid- to long-term outlook for student housing in Ireland remains strong.”

Comprising some 966 bed spaces, the Point Campus complex features amenities including a gym, cinema, common room and roof terrace. Reported rates for rooms start from €230 per week and range up to €330 per week for a self-contained studio, with a range of room types and lease terms on offer. Host, Cork developer Michael O’Flynn’s student accommodation management company, operates the complex.

O’Flynn and global fund manager BlackRock partnered together in 2016 to acquire the prime 0.93 hectare (2.3 acre) site which is adjacent to the Point Square shopping centre and 3Arena venue in order to develop the scheme.

The site was purchased with the benefit of an extant planning permission obtained by receivers appointed over the assets of Wintertide, a company that had formed part of Treasury Holdings’ former property empire.

When the site was sold to O’Flynn and BlackRock in 2016 it was reported that it achieved “more than €20 million”.

Accounts filed by the receivers of Wintertide suggest the developers actually paid nearly €25.5 million for the docklands site.

Outside of its acquisition of the Point Campus, DWS has been one of the most active investors in Dublin’s fast-growing private rented sector (PRS) market.

Last year it spent a total of €345 million on the purchase of 685 residential units across the capital.

In the first instance the German fund paid €145 million for 317 residential units the MKN Property Group is developing. The Prestige portfolio comprises a mix of existing and new-build apartments and houses distributed across four schemes in the north Dublin suburbs of Swords, Raheny, Clontarf and Killester.

The second and larger deal saw DWS acquiring 368 apartments the Cosgrave Property Group is developing at its Cualanor scheme in Dún Laoghaire for around €200 million. In 2019 it paid €108 million for 214 apartments within the same development.