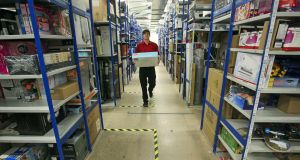 An employee carries an item through a warehouse. There has been a new wave of developers to the Irish industrial and logistics property market. File photograph: Chris Ratcliffe/Bloomberg via Getty Images

In June 2019, investment behemoth Blackstone bought a portfolio of US warehouse investment properties for $18.7 billion. Why? Because it believes that the growth in online retail is only in its infancy and that this will drive significant demand for warehousing and logistics property into the future.

Not only is ecommerce disrupting long-established retailing patterns on the high street, but online retailers also require three times as much warehouse/logistics space as traditional “bricks-and-mortar” retailers, according to Datex, a leading US warehouse management systems expert.

Currently in Ireland, online retailing makes up about 12-13 per cent of the entire retail market, depending on who you listen to, but experts predict that this has the potential to grow exponentially.

Long-term positive predictions have helped to attract a new wave of developers to the Irish industrial and logistics property market. These include international developers backed by private equity such as Exeter Property Group and Mountpark Logistics, as well as domestic operators such as Green Reit (recently sold to Henderson Park) and Iput.

Iput was one of the early investors in large warehouses in this cycle and has now accumulated more than 2.4 million sq ft of logistics property. The latest investor of scale is Palm Capital, a London-based private equity property company that has just agreed to forward purchase two buildings of 284,000sq ft and 165,000sq ft respectively at College Lane in Rathcoole. These warehouses will be by far the largest ever to be developed speculatively in Ireland.

Indeed, scale has been a real feature of this development cycle. Of the 15 warehouse units speculatively developed so far, each of those comprising 40,000sq ft or more were pre-let or let immediately following completion. So far, developers who have been brave enough to build on a bigger scale have been rewarded.

Prime rents for new-build warehousing have been growing strongly, with recent lettings ranging from €9.25–€10.25 per sq ft, depending on specification, scale and lease terms. Additional construction costs associated with the nearly-zero energy building (NZEB) standards that come into effect in January will ensure that rents continue on this upward trajectory.

For 2019, it looks as if take-up of industrial and logistics property in Dublin will hit a healthy 3 million sq ft, which is impressive given the level of uncertainty surrounding Brexit all year. While there is a strong pipeline of active large-scale requirements in the market, there are currently just two speculative warehouses under construction and available in Dublin, and therefore it may be a lack of supply rather than Brexit that has a bigger influence on take-up in 2020.

Kevin McHugh is a director of HARVEY, industrial property specialists

1 Opioid executive admits to ‘no morals’ ahead of prison term
2 Little strategic thinking in either Fine Gael or Fianna Fail’s election manifestos
3 Who are Ireland’s 17 billionaires?
4 Are there annual limits on inheritances or gifts to a child?
5 American YouTubers embrace the crisp sandwich
6 Farmer seeks to challenge €3.6bn Intel plan in High Court
7 Council tells Johnny Ronan firm to keep the noise down at D4 Embassy venue
8 Ryanair wants Irish courts to block Skyscanner from selling its flights
9 Ireland’s €200bn debt burden: how did we get here?
10 Election proposals may make the housing crisis worse
Real news has value SUBSCRIBE