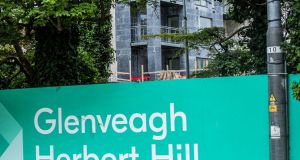 Glenveagh Properties has secured over €55 million from the sale of the 90 high-end apartments at its Herbert Hill scheme next to Dundrum Town Centre in south Dublin to an institutional investor.

While the publicly-listed builder did not disclose the purchaser’s identity, The Irish Times understands from industry sources that the German fund, Realis, is the party involved.

The Herbert Hill scheme represents the second investment by Realis in the Irish property market to date. Last month, the company agreed the forward purchase of the 56 private rented sector apartments that developer Pat Crean’s Marlet Property Group is in the process of delivering at its Ropemaker Place scheme in Dublin’s south docklands.

While Realis is likely to rent the units at Ropemaker Place to the highly-paid workers of companies such as Google, Facebook and AirBnb, the apartments at Herbert Hill will present a rather different proposition.

As revealed by The Irish Times earlier this year, the Dundrum scheme was offered for sale quietly by Davy Corporate Finance with the option for the purchaser of entering into an agreement with Dún Laoghaire Rathdown County Council on the long-term lease of all 90 apartments for use as social housing.

While Glenveagh Properties’ involvement with Herbert Hill doesn’t extend beyond its sale of the scheme to Realis, it is understood the German fund is looking to pursue the agreement with the council.

The plan’s key selling point, according to the prospectus distributed by Davy, was that it would provide the buyer of Herbert Hill with the guarantee of a 25-year stream of rental income, linked to inflation and underpinned by what it described as a “quasi-government backed tenancy covenant” from Dún Laoghaire-Rathdown County Council.

And while Davy said in the document that the apartments at the south Dublin development could deliver gross rental income of some €2.8 million on the open market, the guaranteed income from the council was set in the region of €2.1 million. It is understood this figure would see the council paying monthly rents of some €2,000 for one-bed apartments, €2,500 for two-bed units, and €3,000 for three-bed units.

The document also indicated that the council would also commit to repairing, maintaining and managing the scheme for the entire 25-year duration of its lease.

The council’s figures for 2018 showed that there were 4,524 people on its social housing waiting list.