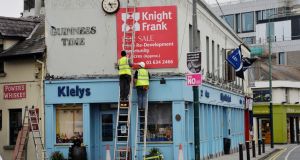 The famous south Dublin pub Kiely’s of Donnybrook may be gone, but its long-standing association with Leinster Rugby and its best-known supporter, the fictional character Ross O’Carroll-Kelly, will not be forgotten under plans being drawn up by its new owner.

While developer Shane Whelan refused to be drawn on the matter following the completion on Friday of his company’s €5 million-plus purchase of the landmark premises, The Irish Times understands that a new bar and restaurant will form part of the residential-led scheme now being envisioned for the 0.2-acre site.

Mr Whelan is expected to seek permission through his company, Westridge Real Estate, for a high-end apartment building of up to six storeys, with a rooftop bar and restaurant offering views over nearby Herbert Park.

And while that may sound like a far remove from the offering Kiely’s served up to legions of Leinster supporters over several decades, it is understood the new venue will recognise the site’s strong rugby heritage.

It remains unclear whether the plaque erected to celebrate Ross’s patronage of the former Kiely’s will take pride of place this time round.

Mr Whelan will be expected to have a keener understanding than most of the Donnybrook pub’s sporting history, having captained Lansdowne Rugby Football Club and lined out for Leinster in the early to mid-2000s. The Westridge Real Estate chief is also the son of the developer and legendary Garryowen star, Munster captain and Irish international hooker Pat “Pa” Whelan.

The redevelopment of the Kiely’s site is expected to be watched closely by local residents. When it was first brought to market in April 2018, Knight Frank selling agent Evan Lonergan indicated that the majority of the Donnybrook site was zoned Objective Z4 under the current Dublin City Development Plan 2016-2022. That allows residential, office, hotel, hostel, restaurant and retail development. A small element of the site to the rear, fronting on to Pembroke cottages, is zoned Objective Z1 – “to protect, provide and improve residential amenities”.

While there is no guarantee that Dublin City Council would approve a proposal for an apartment block of up to six storeys, permission would be in line with the precedent set by An Bord Pleanála in 2018, when it gave the green light to a six-storey 71-bedroom hotel on a site directly across the road.

That site, immediately adjacent to Donnybrook fire station, is owned by Kouchin, a company controlled by the former head of Topaz and founder of Smiles Dental, businessman Emmet O’Neill.

The property had in the past been controlled by Partenay, an investment vehicle associated with Mr O’Neill’s uncle, the billionaire businessman Denis O’Brien.