Rents down by 38% below last peak, as rise in sales volume outpaces rise in value of sales 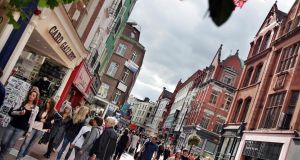 Prime rents on Grafton Street (above) had settled at €6,500 per sq m in September while those on Henry Street stand at €4,683 per sq m. Photograph: Matt Kavanagh

Rents on Dublin’s prime retail streets have stabilised over the past nine months as persistent value-driven behaviour by Irish shoppers is presenting challenges for retailers.

This is the standout finding from a new analysis of the sector from agent Cushman & Wakefield. It says prime rents on Grafton Street had settled at €6,500 per sq m in September (38 per cent below their previous peak) while those on Henry Street stand at €4,683 per sq m (more than 33 per cent off their 2008 peak). Only moderate rental uplifts are predicted on the city’s top thoroughfares in 2018.

When compared with other European cities, rents on Grafton Street are just 3 per cent lower than Frankfurt yet are between 8 and 18 per cent above Barcelona and Amsterdam. But Grafton Street’s rents are “considerably below the prime streets of London, Milan and Paris, where current average shop rents stand two and threefold higher”, according to Cushman & Wakefield.

The report says there are just four vacant shops on Grafton Street, which reflects an occupancy rate of 93 per cent. On Henry Street there are just two shops available to let.

“High occupancy rates in Dublin’s prime high streets have limited retailers’ options,” according to the report. “However, with a number of potential development schemes now in the planning process, the surrounds of Grafton Street and Henry Street have the potential over the coming years to provide high-quality, large floor plates to occupiers. The addition of schemes on Nassau Street, Dawson Street, and Dame Street will also see the core retail district expand, benefiting both retailers and consumers.”

Despite near full occupancy, Dublin’s prime trading streets are experiencing a decline in footfall, which dropped at an annual rate of 1.6 per cent to August on Grafton Street. “Market actors have suggested roadworks and online sales are impacting city centre trade,” according to the report.

An even greater challenge for retailers on Dublin’s prime streets is that the rise in the value of sales is failing to keep pace with growth in sales volumes – and the difference between the two is growing. Cushman & Wakefield reports that retailers point to a “persistent need for price discounting to drive volumes” even as sales volumes are rising at a healthy annual clip of 7 per cent.

“Value-driven consumer behaviour, which began during the downturn, continues to be prevalent in the market, leading to rises in the volume of sales outstripping value growth,” according to the report. It says this trend in retail sales data is “not visible across the EU” where indices show “both the value and volume of retail sales moving in tandem, with similar levels of growth recorded”.

The report says that the “continued divergence” between the value and volume of retail sales growth has presented an “element of concern” among retailers. Low inflation forecasts, sterling weakness and online shopping growth are adding to this concern.

“As retailers attempt to remain competitive,” says the report, “there is no strong indication that value growth will begin to outpace volume in the short term.”

1 Opioid executive admits to ‘no morals’ ahead of prison term
2 Farmer seeks to challenge €3.6bn Intel plan in High Court
3 Who are Ireland’s 17 billionaires?
4 South Dublin Credit Union members urged to borrow more to ensure survival
5 From chips to €14bn in trade: Ireland and Italy’s enduring exchange
6 Council tells Johnny Ronan firm to keep the noise down at D4 Embassy venue
7 Help, I’ve no PRSI stamps – can I still get a pension?
8 Election proposals may make the housing crisis worse
9 NI businesses fear burden of post-Brexit red tape on goods transport
10 Cosgrave should give his speech to Web Summit’s partners in Saudi Arabia
Real news has value SUBSCRIBE