Oakmount acquires 0.35-acre site on border of Dublin 2 and 8

Construction of large building with retail, gym and office space to begin in six weeks 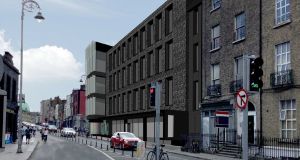 Oakmount, headed by Paddy McKillen Jr and Matt Ryan, acquired the site at the corner of Lennox Street and South Richmond Street from Marlet Property Group, which brought it to market with an asking price of €7 million

Oakmount, the property development company headed by Paddy McKillen Jr and Matt Ryan, has acquired a 0.35-acre site at the corner of Lennox Street and South Richmond Street in Dublin 2 and will begin construction of a large mixed-use building six weeks from now.

The company acquired the site with the benefit of full planning permission earlier this year after it was brought to the market by its owner, Marlet Property Group, with a €7 million price tag. Oakmount is amending the existing planning permission to slightly enlarge the proposed building and provide various improvements to the façade and internal layout.

The four-storey-over-basement structure will, when completed in about 14 months, extend to 3,815sq m (41,060sq ft). A retail unit with about 650sq m (7,000sq ft) of space will occupy the building’s ground floor, while the basement will feature a gym of a similar size, along with parking spaces. Floors one, two and three will hold about 1,858sq m (20,000sq ft) of grade A office space.

The project has obtained funding from GreenOak Real Estate, the US property financiers that began lending in the UK in 2013 and in 2016 set their sights on Ireland and other European markets.

Oakmount’s new office development’s location is on the border of the Dublin 2 and Dublin 8 postcodes, mere moments from the Luas at Harcourt Street, the bars and restaurants of Camden Street and the Grand Canal.

The company is actively acquiring and developing property in both postcodes. Current projects either at planning stage or under construction include a new hotel at Lower Mount Street, a residential and office development on New Row South, a pub on Aungier Street, and an office block on Thomas Street.

If the company paid close to the €7 million asking price, it would represent an impressive return for Marlet, which paid just €3 million for the site in 2015 and then expended further sums to obtain planning permission on it.

Following the exit of co-founder Greg Kavanagh last year, Marlet (formerly named New Generation Homes) has sold off a number of smaller development sites from its significant landbank to other developers. It has been busy buying as well, and acquired its first office building earlier this year at Charlemont Exchange, near the site it has sold to Oakmount, which it is now refurbishing and extending.

1 South Dublin Credit Union members urged to borrow more to ensure survival
2 Farmer seeks to challenge €3.6bn Intel plan in High Court
3 Who are Ireland’s 17 billionaires?
4 EU banking watchdog describes rejection of Cross nomination as ‘unfortunate’
5 US treasury secretary Mnuchin expects next China trade talks in ‘near future’
6 Cosgrave should give his speech to Web Summit’s partners in Saudi Arabia
7 My father in a nursing home wants to gift me his house
8 Heineken outrages parties other beers don't
9 Growth of Dublin must continue even as we strive for balanced regional development
10 LinkedIn confirms plan for massive campus in Dublin city centre
Real news has value SUBSCRIBE