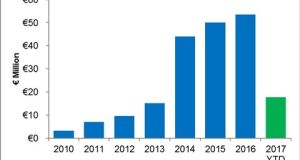 During the first nine months of the year, figures from CBRE show that some 16 pubs changed hands, with an average sale price of € 1.18 million, and a total value of more than €17.8 million.

Pub sales in Dublin fell in the first nine months of the year, as improved trading conditions means that fewer premises are coming to the market.

These pub sales included Boland’s in Stillorgan, which was put on the market for €1.4 million and sold for “well in excess” of that; JJ Smyth’s on Aungier Street, which sold for €1.4 million; Sandyford House in Sandyford, which was on the market for in excess of €2 million and sold for a reported €1.7 million; and MacTurcaill’s on Townsend Street, which was acquired by a consortium including publican and accountant David L’Estrange, and has since opened as Ruin Bar.

“To some extent, an improvement in trading conditions in Dublin is reducing the number of licensed properties that are being offered to the market for sale,” said John Ryan from the hotel and licensed department at CBRE Ireland, although he added that four Dublin pubs are currently sale agreed and expected to close shortly.