North docklands site for €27m could suit residential use 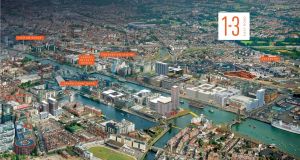 A five-acre site in Dublin’s north docklands with potential to accommodate about 400 apartments for the private rental sector is expected to attract considerable Irish and overseas interest when it goes for sale from today on the instructions of receivers Duff & Phelps. It was originally owned by property developer Liam Carroll, whose business collapsed in 2009.

John Swarbrigg of Savills is guiding €27 million for the 2.10 hectares (5.2 acres), which has a significant unconstrained street frontage on to East Road and is bordered to the north and east by existing residential enclaves. The terminus stop of the Luas Red Line is within walking distance, delivering access to Connolly Rail Station and the city centre within six minutes, as is the Dockland Railway Station.

While there is no planning permission relating to the site, a feasibility study has been prepared to illustrate the development potential. The site will be seen as suitable for primarily residential given the adjacency on three sides of existing residential use. The study, prepared by Dublin architectural firm of O’Mahony and Pike, illustrates the potential to accommodate a scheme of about 400 apartments ideally suited for the private rental sector.

Though the site is occupied, vacant possession will be available by August 2018. This will enable the purchaser to benefit from short-term income while seeking planning permission.

According to Savills, prospective buyers will have the opportunity to capitalise on an area undergoing significant change in the north docklands as well as tap into the pent-up demand for residential accommodation both to rent and to purchase.