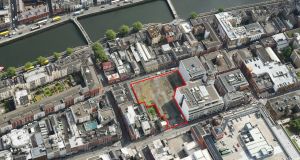 A key development site adjoining the Jervis Luas stop in Dublin’s north inner city, which is likely to be used for a new office block, a hotel or student accommodation, goes on the market today through Knight Frank.

Finín O’Driscoll of that agency is guiding in excess of €14 million for the cleared 0.87 of an acre (0.352 of a hectare) site, which is located in a busy shopping area between Upper Abbey Street and Strand Street Great. It is within 35m of Jervis Shopping Centre and 120m of the Ilac centre.

In 2007 Dublin City Council granted planning permission for a 10-storey mixed-use development on the site to include a 309-bedroom hotel,a retail unit and a bus interchange. This permission was modified in 2009 in respect of the car parking facilities and the hotel was increased in size to 344 beds with 12 multifunction suites. This brought the total development to 17,534sq m (188,131sq ft). Both permissions lapsed during the property crash.

RKD Architects has prepared an in-depth feasibility site study with different end uses to include office, hotel and student accommodation, all of them with a ground floor retail element. The hotel option would have 303 keys with ground floor food and beverage and potential for a penthouse food and beverage facility.

The third option of student accommodation would include 420 rooms together with a library, computer rooms, lounge, gym and bike storage.