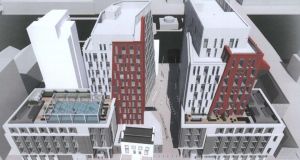 Google Ireland has lodged plans for a five-a-side style playing pitch on the roof terrace of floor five of tower two of the development, enclosed in a steel frame with net surrounding and overhead

A group of Dublin city residents have expressed concerns that an open roof terrace sports facility planned by Google at its Boland’s Mill development will create a nuisance for them.

Work is continuing on Google’s €300 million development at Boland’s Mill, where 1,300 people are to be employed.

The company has lodged plans for a five-a-side style playing pitch on the roof terrace of floor five of tower two of the development, enclosed in a steel frame with net surrounding and overhead.

However, in a submission to Dublin City Council on behalf of Shelbourne Park Residents Association, its planning officer, Billy Ryan, has claimed that excessive noise from the sports facility will cause a nuisance to residents.

Mr Ryan also suggested that events to be held at night-time at the sports facility will impinge on the peace and privacy of the people who live in the houses opposite and other nearby streets and houses.

Mr Ryan said that residents are also concerned over the bright light from the overhead lighting system of the sports facility spilling out onto Barrow Street and the houses opposite.

He also claimed that Barrow Street at the moment “is one big construction site with all that entails for local residents”.

Google Ireland has submitted an “obtrusive light study” and a “roof terrace noise assessment” as part of its application.

The noise assessment concludes that a review of the predicted changes in ambient noise levels finds that they are not significant in the context of the existing noise environment.

The light study states that the lighting scheme to illuminate the sports pitch at the terrace level applies a lower illuminance than typical for an exterior sports lighting scheme, and this was done with a view to reducing obtrusive light on the surroundings.

John Spain, planning consultant for Google, said: “The proposed design of the sports enclosure has been carefully considered in terms of noise impact and visual impact on the surrounding dwellings.”

A decision on the application is due from Dublin City Council next month.