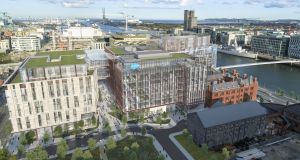 An impression of Salesforce Tower located beside the Central Bank’s Docklands headquarters in Dublin.

Developer Johnny Ronan is looking again to add floors to an office development at Spencer Dock that is due to be occupied by Salesforce, having previously been turned down by Dublin City Council.

Spencer Place Development Company (SPDC) has reapplied to add two floors to a building in Dublin’s docklands, which Salesforce will rent as its Europe, Middle East and Africa headquarters.

After Dublin City Council refused permission for two extra floors to the building, which is already under construction in the North Lotts and Grand Canal Strategic Development Zone (SDZ) at Spencer Dock, Mr Ronan took his fight to the High Court.

Lawyers for his company argued that advice given by the council on the particular planning law governing height restrictions in the North Lotts SDZ was “incorrect as a matter of law”.

The permitted height for the Dublin tower is 39m. Mr Ronan’s company had sought to secure permission for two extra storeys at the project, following the implementation of new rules on building heights introduced by the Minister for Housing Eoghan Murphy last year.

The council has previously said consideration of any additional building height could be considered only following a review of the SDZ. But SPDC has argued that the implementation of such a review could take up to 18 months.

“The site is already under construction and the delay occasioned by this review will mean losing the opportunity to achieve greater heights, more residential units and more jobs,” the company said.

As a result, Mr Ronan’s company is now seeking permission to add the two floors at a different point on the building – Station Square – and pursuant to a different set of rules, namely chapter five of the SDZ guidelines.

Those guidelines state: “There are opportunities for additional height, by way of quality landmarks, in four of the hubs.” These include “Station Square: up to 12 storeys commercial, to provide critical mass while not compromising views from the Georgian mile”.

Rather than trying to secure permission based on the ministerial guidelines, as it had done previously, SPDC will argue that the SDZ guidelines as they currently stand are sufficient for the granting of permission.

The addition of the two extra floors would provide space for an extra 1,000 workers and increase fees paid to CIÉ, which owns the site, by €20 million, the development company has argued.

Salesforce, a US multinational, previously submitted an observation in support of the extra floors, as did IDA Ireland.