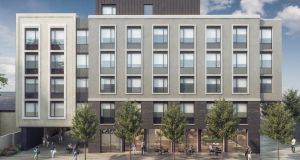 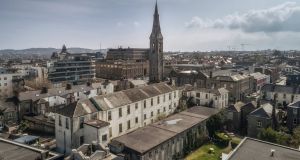 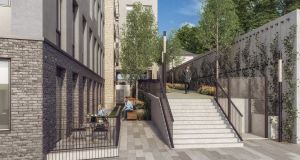 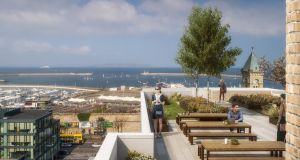 Proposals for the largest co-living apartment complex in the State have been given the green light by planning authorities with work on the Dún Laoghaire town centre development set to begin in the weeks ahead.

Bartra Capital which lodged the application to develop the five-storey, co-living building at the site of a former school house on Eblana Avenue welcomed the decision describing it as “pragmatic”.

However People Before Profit TD for Dún Laoghaire Richard Boyd Barrett condemned the move as “shocking and disgraceful” and likened the development to a “modern tenement”.

The developer has championed the controversial design concept of co-living which has only recently been included in planning regulations and sees residents sharing a communal living space.

Under the rules, developers are not obliged to provide car parking facilities for tenants and are exempt from social housing obligations. They are also allowed a higher number of units per floor than standard apartment developments.

Its planning application for the 208-unit scheme on the site of the former CBS Christian Brother’s school includes a provision for communal kitchen facilities, which would be shared by up to 42 residents.

In a statement Bartra said it had noted the decision of An Bord Pleanála to grant planning permission for its proposed development and was in the process of studying the detail of the decision.

“This is a pragmatic decision based on Ireland’s need to embrace new tenure types,” chief executive Mike Flannery said.

“The board recognise that there is a place for co-living within the Irish housing market and we look forward to delivering this new and innovative form of accommodation.”

The statement went on to say that Ireland “needs new models of housing to cater for changing demographics, living habits and employment patterns. Co-living is one such response to these changes”.

It added that it was form of accommodation targeted specifically at single professionals “who do not want a single room apartment and has worked well in other cities including London, New York and Vienna.

The company said it would now proceed with the development and implement all conditions outlined by An Bord Pleanála.

Mr Boyd Barrett said the development was “not about solving the housing crisis but exploiting it for profit”.

He said he was “utterly disgusted that this development has been given the go ahead by An Bord Pleanála. This application is for nothing more than modern tenements and an excuse for Bartra to maximise the profits at this prime site in central Dún Laoghaire.

“These box rooms with pull out beds will have zero impact on the housing crisis and will only mean more unaffordable, inadequate places to sleep for people. Inevitably the box rooms will become modern day tenements and the only people to benefit will be the greedy developers who are only interested in exploiting the housing crisis rather than solving it.”

In recent weeks the Minister for Housing Eoghan Murphy came in for fierce criticism after describing the concept as “exciting” and saying young people would “sacrifice less space for less rent”.

In one interview he drew a comparison between co-living spaces and a “very trendy, kind of boutique hotel type place”.

He subsequently was forced into a u-turn and issued a statement in which he said the comparison “wasn’t a good one”.