Press Up Entertainment: Who is behind it and what do they do?

Paddy McKillen jnr and Matt Ryan employ 1,600 in 46 venues with plans to expand 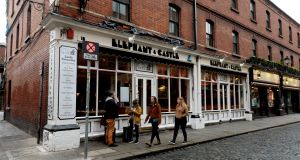 Since being established in 2009, Paddy McKillen jnr and Matt Ryan’s Press Up Entertainment Group has grown every year to the point where it has become a major force in Dublin’s hotel, bar and restaurant scene, with plans to expand to other parts of the country.

Having first taken on the running of Captain America’s on Grafton Street and Wagamama on nearby South King Street on behalf of the McKillen family, the pair took full advantage of the fear the financial crash engendered in potential competitors to grow the Press Up business aggressively.

Today, the company employs about 1,600 people in 46 venues distributed across the capital. There are plans to open a further 15 hotels, restaurants, bars and a cinema this year and next.

Revenues for 2019 are expected to hit €80 million before eclipsing the €100 million mark by the end of 2021, according to Ryan. Press Up’s latest set of accounts shows that its revenues came close to €58 million in 2017.

The group’s hotel offering alone currently includes The Clarence, The Dean and The Devlin, all in Dublin.

These will be joined shortly by the Mayson, which is being developed by McKillen jnr and Ryan’s development company, Oakmount, next to the Central Bank of Ireland’s new headquarters and Ballymore’s one million square foot Dublin Landings office and apartment scheme at North Wall Quay in the Dublin docklands. The company is also progressing plans for two new Dean hotels, which will be located in Cork and Galway.

Outside of its plans to expand the Dean brand across Ireland’s main cities, the company recently established a new office in London with a view to scope out the market for the possible opening of a Dean Hotel in the UK capital.