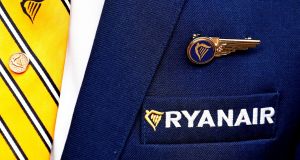 Ryanair pilots in Ireland have voted to strike on Thursday and Friday, August 22nd and 23rd, at the height of the summer holiday season

Ryanair pilots in Ireland have voted to strike on Thursday and Friday, August 22nd and 23rd, at the height of the summer holiday season. The trade union Fórsa served strike notice on the company and said pilots would notify the company of “further strike days in due course”. With pilots in the UK and cabin crew in Portugal also planning to strike on August 22nd the move will bring substantial disruption to European services on that day.

UK property company Henderson Park Capital is weighing up the sale of certain assets within the Green Reit portfolio following the completion of its €1.34 billion acquisition of the company. While Henderson has yet to decide which, if any, of the assets it may dispose of once it secures ownership of Green Reit, a number of industry sources suggested the London-headquartered company could look to offload up to 50 per cent of Green’s property portfolio once it secures ownership.

Sweden has joined the club of countries that have sold 10-year debt at a negative yield in a sign of how the dramatic rally in the global fixed-income market is sweeping in to bonds with longer maturities. Meanwhile Argentina’s peso resumed its slide on Wednesday as President Mauricio Macri announced a raft of emergency measures aimed at providing relief to a population suffering from the impact of a sharp devaluation following his stunning defeat in primary elections.

The supply of new homes appears to be taking the heat out of the property market with annual inflation falling to just 2 per cent in June, its lowest level in six years. This compares with 12 per cent a year ago. In Dublin, prices flatlined, rising just 0.1 per cent in the 12 months to June, with house prices unchanged and apartment prices up by 0.1 per cent.

Facebook risks another spat with European Union privacy watchdogs following reports the social-media giant paid contractors to transcribe clips of audio from users of its services.

In her Net Results column, Karlin Lillington unmasks the dystopian nightmare of airport facial recognition, which is often rebranded as a travel perk in the form of faster access to the baggage carousels in exchange for your most personal of data.

In our technology coverage, Ciara O’Brien offers advice on the best tech gadgets, software and apps for students, while Charlie Taylor interviews tech startup veteran Pearse Coyle, who is heading up a new €100 million seed fund that targets deep tech, the cutting edge lab research that rarely sees the light of day in the commercial world.