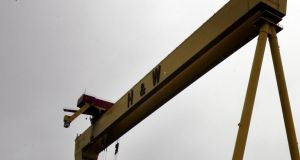 Administrators in charge of Harland & Wolff cannot simply sell off the Belfast shipyard site it occupies purely for commercial or residential development because a “restrictive lease covenant” is in place, industry sources have confirmed.

Harland & Wolff, located on land which is part of the Belfast Harbour estate, is in possession of two long-term leases for the site, which extends to an area totalling just under 100 acres.

The majority of the site occupied by the historic yard, which built the Titanic, is covered by a lease which runs until 2119 while a second lease, which includes the dry dock area, expires in 2050.

It is understood the appointment of Michael Jennings and Brian Murphy from BDO Northern Ireland as joint administrators to the shipyard last week does not impact on the current leasing arrangements.

The lease covenant dictates that all economic activity on the sites are restricted to “shipbuilding, ship repair and heavy engineering”.

In addition, the North’s department for communities has confirmed that the giant yellow gantry cranes, known locally as Sampson and Goliath, are scheduled historic monuments, which means that any proposal to alter or remove the cranes would require consent from the department.

Trade union leaders would like to see the yard sold to an “investor with a long-term commitment” to both Harland & Wolff, and Northern Ireland.

Susan Fitzgerald, regional co-ordinating officer with trade union Unite, said the worst-case scenario was the shipyard could be sold to a “brand stripper” who would use its history as a “marketing device”.

Union leaders remain upbeat about the prospect of finding a buyer for the yard to “inject new investment and save jobs”.

The joint administrators have confirmed that a number of “interested parties and potential bidders” have contacted them about the yard.

Last week they agreed with unions to the unpaid temporary layoff of Harland & Wolff’s remaining 130 workers, which ensures that their contracts of employment remain unbroken.

Mr Jennings and Mr Murphy said the arrangement would provide limited additional time for them to pursue a buyer for the yard. But the clock is ticking on this arrangement, which will expire on August 16th.

Harland & Wolff currently sits alongside Titanic Quarter, which was also once shipbuilding land covered by strict lease agreements and which is now one of Europe’s largest waterfront regeneration projects.

Fred Olsen Energy ASA, previously the parent company of Harland & Wolff Group, acquired all of the yard’s property portfolio in 2001 for what was described back then as a “gross consideration” of £46 million (€49.6 million). The yard had a core workforce of nearly 600 people at the time.

He also outlined then that an agreement had been put in place with Fred Olsen Energy governing the use of the shipyard’s core land covering some 166 acres.

At the same time as the property acquisition in 2001, Fred Olsen Energy ASA also secured an agreement with the Belfast Harbour Commissioners for the commercial development of about 100 acres of former shipyard land which then became Titanic Quarter.

This agreement between the shipyard’s Norwegian parent and Belfast Harbour Commissioners subsequently became the subject of a Stormont inquiry following allegations of a secret land deal.

Harcourt continues to develop the quarter, which is now home to more than 100 companies, including high-profile inward investors, that employ nearly 6,000 people. It also includes the Titanic Belfast visitor attraction and the Titanic Hotel.

Fred Olsen Energy ASA changed its name in 2018 to Dolphin Drilling ASA, which has gone bankrupt.