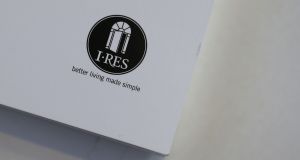 The State’s largest landlord has raised almost €200 million in debt to help pay down its revolving credit facility.

The debt has a weighted average fixed interest rate of 1.92 per cent and an average maturity of 9.7 years, the company said in a stock market update.

“We are very pleased to have completed successfully our first notes private placement which was heavily oversubscribed and reflects the strong support of investors for the company,” said I-Res chief executive Margaret Sweeney.

“The closing of this transaction is part of our proactive financing strategy to reduce the cost and significantly extend the maturity of our debt facilities as well as diversifying the range of debt providers to the company. This also gives the company access to a broader range of funding options in the future to support the company’s growth strategy.”

Goodbody analyst Colm Lauder said the money raised in the well-flagged plan to borrow in the market would be used to pay down the company’s €600 million revolving credit facility.

“I-Res noted at its full-year results in February that there was no widening in the interest rate sought from investors following the General Election outcome and it is welcome to see the deal complete in the face of the macro uncertainty currently hindering the stock price,” he said.