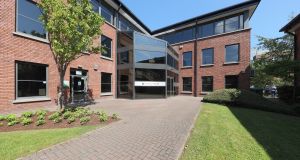 Hainault House was refurbished fully and upgraded by Jones Investments in advance of its sale.

Jones Investments has secured just over €3.6 million from the sale of Hainault House at Belgard Square South, Dublin 24, to a private European investor.

The completion of the deal comes just three weeks after the developer brought the property to the market through joint agents Savills and QRE.

Jones Investments purchased the property in October 2016 and undertook a significant course of refurbishment and upgrade works to transform it from a standard 1990s building into a modern office space.

The building is fully let to the Citizens Information Board, Optical Express and Early Childhood Ireland, and is generating contracted rental income of €281,000 per annum. The investment provides for a weighted average unexpired lease term (wault) to expiry of more than 10 years and a wault to break of about seven years.

The subject property is positioned between the Plaza Hotel and the Square Town Centre on Belgard Square South and benefits from its proximity to Dublin city centre just 10km away.

Jones Investments have a proven track record of similar asset management initiatives which include the acquisition, refurbishment and disposal of the The One Building on Grand Canal Street and the Dockmill Building on Barrow Street. The company is on site constructing The Bottleworks, a 40,000sq ft development next to Google’s European headquarters in the Dublin docklands.