Investing and the coronavirus: keep calm and carry on

‘These are the days when you don’t need financial advice, you need a psychologist’ 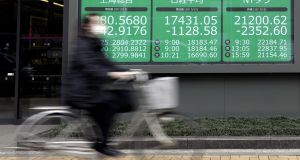 Market advances tend to be relatively slow, steady affairs that build over time, but declines are often rapid and violent. Photograph: Kiyoshi Ota/Bloomberg

Stock markets have taken a pounding since coronavirus swept across the world. Adopting a “keep calm and carry on” attitude isn’t easy when you’re contending with the worry of both a global health pandemic as well as a severely bloodied portfolio, but investors would do well to remember some key points in these stressful times.

Up the escalator, down the elevator

Anyone who has taken the time to devise a long-term investment plan will know that market go down as well as up. Investing really is a case of “no pain, no gain”; you have to be willing to put up with the bear markets if you want to enjoy the bull markets.

Nevertheless, market declines are scary affairs. There’s an old investing adage that markets go up the escalator and down the elevator; market advances tend to be relatively slow, steady affairs that build over time, but declines are often rapid and violent.

That’s been especially true in recent weeks. The Stoxx Europe 600 hit an all-time high on February 19th; less than three weeks later, it was in a bear market. The S&P 500’s descent from all-time highs over the same period has been one of the most rapid in history. The index’s 7.6 per cent collapse on March 9th was especially dramatic, marking one of the worst one-day performances since the 1930s.

“These are the days when you don’t need financial advice, you need a psychologist,” says Ritholtz Wealth Management’s Ben Carlson. “This is why managing people is always more important than managing investments when you work in the financial services industry. Anyone can build a portfolio. Not everyone can stick to a plan.”

Getting back in when the dust settles

“Why don’t we just sell everything and wait this out? Get back in when the dust settles?” Financial advisers are getting asked this question at the moment, says Ritholtz Wealth Management chief executive and Reformed Broker blogger Josh Brown, but the reality is we won’t know when the dust settles until well after the event.

Not only that, stocks will be well off their lows when the dust has settled. In 2009, for example, the US recession officially ended in June, but stocks had already rallied more than 40 per cent off their March lows by then. At the time, many saw this as no more than dead cat bounce. Indeed, Brown notes there “were still people calling us three, five and seven years later who had gone to cash and still hadn’t gotten back into stocks.”

Following the recent market falls, fund giant Fidelity noted the average increase in the S&P 500 the year after the bottom of a market cycle is 47 per cent, but many investors “have checked out” and miss the “early, often powerful, rebound”.

Of course, stocks may well continue to fall over a long period – no one knows, but we do know that you can’t wait for the dust to settle. To quote another market adage, by the time the smoke has lifted, the train has often left the station.

No, everyone isn’t panicking

“It’s easy to say things like ‘everyone is panicking’,” says Morgan Housel of the Collaborative Fund. “But it’s never even close to true. The huge majority of investors, workers, and business managers are just trying to get their kids off to school, drive to work, and make it through the day a little smarter and more productive than they were yesterday.”

Statistics bear out Housel’s point. Index fund giant Vanguard has said only 1 per cent of its clients traded in the week that the recent market volatility erupted, with the vast majority of its investors buying stock funds – not selling.

Vanguard has previously noted that during the severe turbulence of August 2011, when European and US debt fears overwhelmed markets, 98 per cent of its investors didn’t make one change to their retirement portfolios. Even in October 2008, at the very height of the global financial crisis, 96 per cent left their portfolio unchanged.

More than any other firm, Vanguard is famous for preaching the gospel of buy and hold, of assembling a low-cost portfolio and sticking with it over a multi-decade period. As a result, its investors may not be typical; they may be a calmer, wiser bunch. Still, the reality is that most pension fund investors aren’t panicking; they’re doing just what they should be doing – nothing.

Perennial market bears tend to enjoy saying “I told you so” when markets swoon. However, nobody “called this”, says Josh Brown. Yes, many have been calling for a recession this year, “but they are the same people who have been calling for recession every year”. There are people “who spent 10 years and about 23,000 Dow points predicting bear markets perpetually,” says Brown. “This doesn’t take any talent.”

Brown is right. There’s nothing wrong with having a bearish view, but being a perma-bear is tiresome and indicative of a closed mind. Both bulls and bears can be “right” for the wrong reasons.

For years, some bears have complained that overvalued stock markets would be on the floor were it not for manipulative central bankers, or because of stock buybacks, or some such variant. The fact that a deadly virus has suddenly wreaked havoc around the world doesn’t mean those arguments were right.

“There is a difference between, ‘he predicted the crash of 2008,’ and ‘he predicted crashes, one of which happened to occur in 2008’,” says Housel. “It’s important to know the difference when praising investors.”

This too shall pass

Analysts at Stifel argue the coronavirus is reminiscent of 1990, when Iraq invaded Kuwait, in terms of stock market effect, seeing it as a “short, sharp, out-of-the blue shock that, after the fact, proved to have been painful, but economically overrated”. Vanguard chief economist Joe Davis is similarly calm, saying the coronavirus is “unlikely to be the second coming of the global financial crisis”, with recovery “more likely akin to a disaster-relief effort”.

Davis’s message is simple: “Investors, we’ve been here before. We’ve seen 13 corrections and eight bear markets in global equities in the last 40 years. That’s about one every other year. And over that 40 years, global equities increased by a magnitude of 17 times. So hang in there. This too shall pass.”

Of course, some bear markets are worse than others, and Vanguard may well be underestimating the economic fallout from this human tragedy. Nevertheless, as Warren Buffett noted during the 2008 financial crisis, the world endued two World Wars, the 1930s depression, oil shocks, a flu epidemic, “a dozen or so recessions and financial panics”, and more, during the 20th century, yet the Dow Jones Industrial Average rose from 66 to 11,497.

To repeat: this too shall pass.