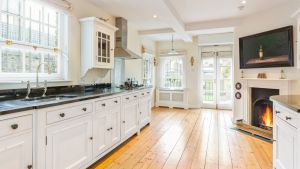 Houses along Wellington Road were built between 1845 and 1855, and almost two centuries later still remain in high demand among well-heeled buyers seeking homes close to the city.

The wide tree-lined road always appears quiet, even at peak traffic times despite sitting between two of the city’s main traffic arteries. It is as if it exists in a suspended bubble compared to other roads in the affluent suburb of Ballsbridge.

Number 55, which has just come on the market through Sherry FitzGerald will tick quite a lot of boxes for those in search of a period townhouse in Dublin 4.

In its current layout, the property has a one-bedroom apartment at garden level. But new owners will probably want to amalgamate this back into the house, which has a generous 288sq m (3,100sq ft) of living space.

All the period features remain in place, including a beautiful stained-glass fan light over the doorway and a matching rose window on the upper floor.

There are three bedrooms on the upper floor, all of which have fireplaces and the room to the rear is en suite.

The gardens of the house have huge potential. While neat and trimmed, they are crying out for more shrubbery. The front which lies behind electric gates, allowing for off street parking, extends to 100ft, and the rear runs to 65ft, which would allow for a sizeable extension subject to planning permission.

Recent sales on the road include Number 10, which at 381sq m had the additional benefit of a coach house that backed on to Raglan Lane. It sold for more than €3.5 million in 2017. Number 19, the former home of public relations guru PJ Mara, and measuring 280sq m sold in 2017 for €2.6 million.