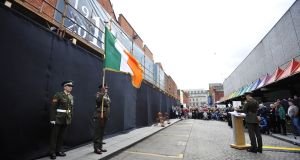 Members of the Defence Forces at a 1916 wreath-laying ceremony in Moore Street, Dublin

Unsurprisingly to some observers, the Court of Appeal on Wednesday overturned an earlier ruling that buildings around Moore Street in central Dublin, where the 1916 Rising played out its last act, were a national monument.

The High Court declared the buildings a national monument in an earlier case, but Mr Justice Gerard Hogan said on Wednesday that such choices were determined by either government or legislative power, and not by the courts.

He and his colleagues, Mr Justice George Birmingham and Mr Justice Michael Peart, said the judiciary’s only role in this area was to review decisions made under the National Monuments Act. They pointed out that there was a wide gap between such reviews and a court declaring something to be a national monument.

Planners will be grateful to Justice Hogan. The High Court ruling left them facing an appalling vista of judges declaring anything vaguely historic a national monument every time an objector turned up in court.

While he clarified the rules governing the courts’ role declaring something a national monument, Justice Hogan also pointed out that such decisions were symbolic, a statement of who and what we decide to venerate.

The Moore Street site resonates with a lot of Irish people, not just ardent nationalists, because it is where a centrally important chapter in the nation’s history drew to a close. The Government has plans to mark this, and the court on Wednesday lifted an order restraining it from going ahead with that.

The buildings in question are part of a bigger site controlled by shopping mall specialist Hammerson, which hopes to redevelop the area. The property company has already pledged to begin talks with all interested parties and to protect the site’s heritage and connection with 1916.

Not everybody will be happy to see an area connected to the Rising subsumed into a shopping centre, but it’s worth remembering a large part of the overall site stands idle, which is not a fitting monument to anything.