Cantillon: Shane Ross has yet to approve IAA’s choice of Peter Kearney as new CEO 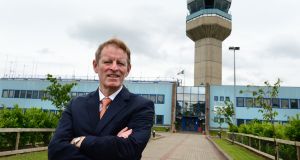 The Government is fond of trumpeting the success of its aviation policy, which it likes to claim is based on the idea that, rather than seeing the industry as a product of economic growth, it can be used to drive that growth.

This policy is relatively new. In fact, the previous Government dreamt it up more or less at the same time as a number of factors, such as falling fuel prices and cheap credit to fund aircraft purchases, were conspiring to drive growth in world aviation.

However, that has not stopped either the current or the previous administration from pointing to such things as record passenger numbers at Dublin Airport as being largely down to their policies.

As both fuel and interest charges are on the way up, there are a few headwinds on the way for airlines. That in turn will show just how influential policy is and whether the Government’s approach amounted to much more than tweaking things at just the right time.

But given all the trumpeting, it is strange that the Government is letting things drift in one aspect of this industry where it has control: the Irish Aviation Authority (IAA), the State’s air travel safety regulator and air traffic controller.

Last year, the authority’s board chose Peter Kearney as its chief executive, to replace the departed Eamonn Brennan, but the Minister for Transport, Shane Ross, has yet to approve the appointment. Instead his department says that consultation with the IAA is ongoing.

The IAA oversees air travellers’ safety. It regulates Europe’s biggest airline, Ryanair, which is headquartered here. Similarly, it guides thousands of flights through the Republic’s airspace every day. Allowing a question mark to hang over its leadership is far from ideal.

The drift may be linked to Government plans to break up the IAA. Whatever the reason, the department is, as usual, giving no explanation for its action or, in this case, the lack of it.