Australian chain to pay a Zone A rent of €275,000 for centrally located store 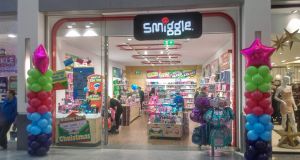 Dublin’s Grafton Street is set for a little more variety with plans by the Australian stationary sensation Smiggle to open a new outlet on the street this summer. It will be the company’s second city-centre store – the other one is in the Ilac Centre – and the fourth in Dublin.

Smiggle sells brightly coloured “fashion” stationery that has caught the imagination of children since hitting the UK in 2014. It has more than 100 outlets in the UK.

The planned store on Grafton Street was formerly a pop-up shop at No 32, where German discount grocer Lidl grabbed much attention in the run-up to Christmas with its display of the Heidi Klum fashion brand.

Letting agent James Quinlan of Bannon, who acted for Irish Life, said the letting highlighted the improving tone of rents on the street, underpinned by demand from international retailers seeking a presence on the most successful prime retail location in Ireland.

High-profile new tenants who have moved into the street in the past 15 moths include Urban Decay, & Other Stories and Victoria’s Secret.

Directly opposite the planned Smiggle store, Irish Life has completed the purchase of 80 Grafton Street, which is rented by Molton Brown on a 25-year lease from 2014.

Martin O’Reilly, head of property at Irish Life, said the company was delighted to welcome Smiggle and Molton Brown to its Grafton street retailer line-up.