Also: Rising stars at BNP Paribas and a purpose-built creche in Chapelizod 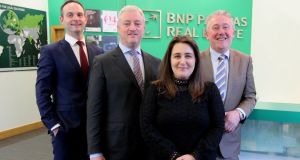 Since acquiring Q House for a private investor for more than €9.5 million, Peter Flanagan of Knight Frank has been busy letting office suites in the block at Furze Road in Sandyford, Co Dublin. The overall investment will show an initial yield of 6.27 per cent.

Appointments and a promotion

Damien McCaffrey has been named director investment; Bobby Lloyd has been appointed director land and development; and Jerry Corcoran has joined the company as divisional director building consultancy. Sarah Lynch has been promoted to the post of associate director in the property management division.

Agent QRE has secured €400,000 for a creche investment at Knockaree, Chapelizod, Dublin 20. The detached, purpose-built creche, built in 2000, is located in the busy village and produces an annual rent of €40,000. The lease runs for five years from September 2016.