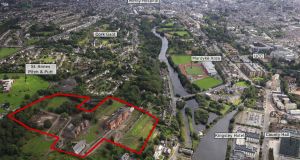 A former psychiatric hospital that was badly damaged by fire last July is expected to be used primarily for a new housing and apartment development when it is sold on behalf of the HSE.

Lisney is guiding €2.95 million for the former St Kevin’s Hospital, which stands on a site of 5.742 hectares (14.118 acres) close to University College Cork and 2.5km west of the city centre.

One report suggests that about two-thirds of the hospital buildings were seriously damaged by the fire, which took almost eight hours to be brought under control.

Most of the site is zoned “residential, local services and institutional uses” in the Cork City Development Plan 2015-2021. A number of the buildings are noted in the national inventory of architectural heritage.

Margaret Kelleher of Lisney said it was expected that some of the existing structures will convert to residential use given the height and scale of the buildings. There were also new-build opportunities in the undeveloped sections.