City centre Georgian for €950,000 could be a fine townhouse

South Frederick Street house currently in offices and gallery use 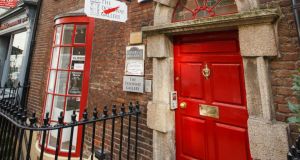 A city centre Georgian office building with a handsome ground floor gallery and three floors of offices overhead looks set to attract considerable attention when it goes on the market through Herlihy Auctioneers.

While number 24 South Frederick Street is being sold as an investment property, the fact that there are break clauses in the office leases over the coming 24 months may open the way for the house to be returned to residential use.

Herlihy Auctioneers is guiding €950,000 for the house, which extends to 260sq m (2,800 sq ft) and currently produces a rental income of €67,000. The basement and ground floor host the Doorway Gallery under a three-year lease.

The 18th-century street is one of the most charming locations in the city centre, within minutes’ walk of the Dáil, the National Gallery and the new AIB headquarters. The house for sale boasts period features throughout, including the original doors, banisters and fireplaces. There is a small yard to the rear.

Quillsen Auctioneers is seeking in excess of €3 million for a residential redevelopment opportunity based on The Haven at 126 Howth Road, Clontarf, Dublin 3. A feasibility study by Downey Planning found that demolishing the existing house will provide potential for three four-storey apartment blocks (providing 25 units) and one detached house to the rear. Paul Menton of the selling agents said other development schemes would also be suitable for the property.

A rare opportunity to redevelop a key site in Sandymount, Dublin 4, will arise shortly with the planned sale of a mixed-use property at 3-4 Sandymount Green. Bennetts Auctioneers is quoting €2.9 million for the 590sq m site, which accommodates four retail units, three offices and two residential units. They currently produce a rental income of about €150,000.

A recently refurbished production and office building within the actively managed Swords Business Park has come on the letting market through William Harvey & Co. Kieran Casey is quoting a rent of €250,000 for the building, which extends to 2,579sq m (27,760sq ft) and is located on a surfaced site extending to 2.57 acres.

1 Level 5 restrictions risk pushing economy into double-dip recession
2 Covid-19 has shown that much of ‘normal’ life should have been binned years ago
3 Cabinet to agree on implementing EU travel plan
4 EU agrees to intensify talks on post-Brexit deal
5 Number of houses for sale falls to 14-year low
6 ‘Lockdown lobby’ needs to explain why this time would be different
7 Banks urge borrowers facing hit from new restrictions to engage
8 ‘I struggled in the beginning but now I really love it’
9 Irish retailers are not hotbeds of Covid-19 infection, figures suggest
10 ‘The beauty of San Francisco is the diversity’
Real news has value SUBSCRIBE