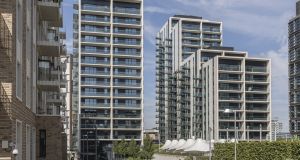 The private equity owner of Quintain, the developer behind one of London’s largest developments at Wembley, has hired financial advisers to explore a sale of the business that could raise more than £3 billion (€3.43 billion).

Lone Star, the US-based buyout group, has appointed Eastdil and Credit Suisse to work on a sale of Quintain, the London property group it took private in 2015. Lone Star is looking to reduce its exposure to Britain’s property market ahead of Brexit, according to people informed on the matter.

Lone Star bought Quintain for about £1 billion including debt in 2015. It may also opt for a partial sale of the business, these sources said. Quintain declined to comment.

Quintain’s largest project is an 85-acre development around Wembley Stadium in northwest London, where it has outline planning permission for 817,546 sq m (8.8 million sq ft) of space to be used for shops, restaurants, bars and homes. The development is set to be completed by 2024, with 3,000 of the rental homes ready by 2020.

A potential sale comes as residential property in London is under pressure. House prices fell for the first time since 2009 at the end of last year, as Brexit-related uncertainty and slow wage growth took their toll.

Quintain would be the second British asset Lone Star has looked to offload in recent months. Late last year, it sold Irish hotel chain Jurys Inn to Pandox, a Swedish company, for £800 million.

Angus Dodd, chief executive of Quintain, was co-head of European real estate at Lone Star before leaving to head up Quintain in June 2016. Mr Dodd would stay in post at Quintain in the event of a sale.

The group has said it aims to build about 5,000 homes for rental at Wembley, making it the country’s largest single-site “build to rent” development, and launched Tipi, a residential rental management group, in 2016.

The UK’s £1 trillion residential rental sector is mostly run by amateur buy-to-let investors, who typically own a handful of properties. But in recent years developers and investors have been building purpose-built blocks to let out.

Among those interested in such schemes are Brookfield, the world’s second-largest real estate manager;UK asset managers Legal & General Investment Management; M&G Investments; and Oxford Properties. The latter is the property arm of a $72 billion Canadian pension fund, the Ontario Municipal Employees Retirement System.

Brookfield, which owns a stake in Canary Wharf Group along with the Qatar Investment Authority, has previously outlined plans to hold about one million sq ft of space spread across three high-end residential towers under development by CWG.

In 2012, Quintain brought in a new management team that decided to dispose of some assets and reposition itself as a London-focused outfit.

The following year, Quintain sold its stake in Greenwich Peninsula, a development around the O2 stadium in east London, to Hong Kong billionaire Henry Cheng Kar-Shun, in order to concentrate on its Wembley Park scheme. – Copyright The Financial Times Limited 2018