Skechers store on Henry Street for sale for €8.35m

Israeli investor bought the building in 2012 for about €4.5m 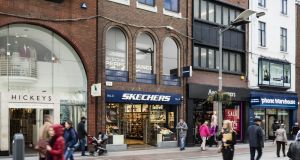 With an ever-increasing number of funds and private investors looking for well-located retail investments on Dublin’s Henry Street, there is likely to be strong competition for the Skechers footwear store when it goes for sale from today.

Skechers occupies a prominent location at 4 Henry Street, between Arnotts department store and the junction with Liffey Street, directly opposite Debenhams and virtually opposite the entrance to the Ilac centre. Close by there are a number of new trading opportunities due to be unveiled in the coming weeks.

The building now going for sale was the first in Ireland to trade as Skechers. After its runaway success it now forms part of a 17-strong chain of similar shops.

The building was originally let to Shuz 4 U, trading as Skechers, on a full repairing and insuring 15-year lease from September 2010. The terms also include a tenant break option in 2020.

The Henry Street investment is to be sold on behalf of Israeli businessmn Igal Ahouvi, who bought it in 2012 for around €4.5 million. His investments also include four large supermarkets (Tesco in Gorey and Roscrea and Aldi in Sandyford and Cahir), as well as the MacDonalds-led Maple Centre at Cabra in north Dublin.

According to O’Neill, strong employment figures and positive consumer sentiment, particularly in Dublin, was likely to lead to increasing rental growth in this prime retail location, thus providing investors with a safe and increasing return on their equity.