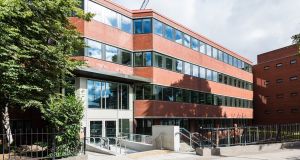 A German fund has bought Two Haddington Buildings, a newly refurbished office investment on Haddington Road in Dublin 4 for €24 million. The 2,601sq m (28,000sq ft) building will show a net initial yield of 5.4 per cent.

It is Quadoro Doric’s second office acquisition, coming eight months after it bought One Grand Parade on the Grand Canal in Ranelagh for €26 million.

Last October Two Haddington Buildings was pre-let to Dentsu Aegis, a multinational media and digital company, which signed a 20-year lease at a passing annual rent of €1.4 million.

The block originally formed part of Hibernian Insurance’s three headquarter buildings, with an overall floor area of 10,497sq m (113,000sq ft) at Haddington Road and Percy Place.The buildings were bought at the height of the property boom in 2006 by Kildare businessman Gerry Conlon. After the crash they featured in the Project Spring loan book, which was offered for sale by Nama and knocked down to Deutsche Bank.

The next phase of the Dublin 4 project involving Three Haddington Buildings will see this 1,858sq m (20,000sq ft\) headquarters refurbished on the same lines as the first block. The headquarters-style building will be ready to fit out towards the end of the year.

Joint agents Savills and HWBC are quoting a rent of €560 per sq m (€52/sq ft) for the office accommodation in Three Haddington Buildings and €4,000 for car-parking spaces. The final phase of the development involving the third block will see the 3,901sq m (42,000sq ft) facility undergo extensive refurbishment, to be completed by the second half of 2019.