Live at the Marquee site in Cork’s docklands for sale for €8.5m

Land on 11.3 acres, for many years owned by Ford, sold at height of Celtic Tiger for €35m 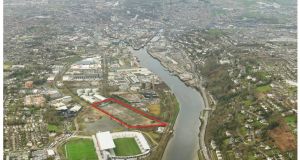 The 11.3-acre site in Cork’s south docklands is back on the market on the instructions of receivers for €8.5 million

The long-awaited sale of the former Ford distribution site in Cork’s south docklands is finally to proceed. The 11.3 acres, bought at the height of the property boom for more than €35 million, are back on the market on the instructions of receivers for €8.5 million.

Denis O’Donoghue of selling agent CBRE Cork said he expects considerable domestic and international developer interest in the site, which because of its opportunity of scale was set to transform the city over the next 20 years under a Government-led agenda.

The site is well known to music fans as the venue for the annual Live at the Marquee summer music festival, which attracts thousands of visitors to the city each year. It was previously owned by Howard Holdings, once one of Cork’s most visionary developers, who delivered the 191-bedroom Clayton Hotel and the City Quarter office complex.

Howard secured a high-density planning permission for the site, which is remain in place until 2019. It includes the development of 564 apartments, offices extending to 31,777sq m (342,041sq ft), a 200-bedroom hotel, and a 5,000-seat events centre designed by Scott Tallon Walker and Norman Foster & Partners.

The development site and the adjoining areas of the south docklands have a long history, serving as a racecourse in the 1880s.

The arrival of the Ford Motor company in 1917 saw much of the docklands given over to line assembly of the Model T. The 11.3-acre site was used as a car storage compound in the early 1970s and sold to Howard Holdings at the height of the Celtic Tiger era.

Cork’s south docklands extends to more than 324 acres, with 4km of river frontage stretching from the newly built 45,000-seat Páirc Uí Chaoimh stadium in the east to the Navigation Square office development in Albert Quay to the west. A new development plan for the south docklands is due for publication in June.

O’Donoghue described the south docklands as “one of the largest development opportunities in Europe”. While Dublin was a mature market, Cork was just starting on its journey to becoming a true second city, he said, and now had all the ingredients required in terms of Government support, new planning guidelines, occupier demand, and capital and business confidence.

1 Dublin and Cork airports look at setting up pre-flight Covid testing centres
2 Facebook forced to confront moment of truth on data privacy
3 Irish company to test vaccines on volunteers deliberately infected with Covid-19
4 Willie Walsh joins CarTrawler as deputy chairman
5 Air travel never going ‘back to way it was’
6 Should I switch bank now with Ulster Bank at risk of closing?
7 Eir takes on extra staff as ComReg chases it on complaints
8 Women accounted for 60% Iseq board recruits in 2019
9 State calls for applications to €500m disruptive technologies fund
10 Coronavirus vaccine: 15 billion doses needed to inoculate the planet
Real news has value SUBSCRIBE