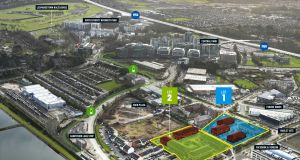 In the first instance, the company is understood to have paid around €13.5 million for the long leasehold interest of five fully-let units at the Sandyford Business Centre in south Dublin. The second transaction, which is close to being finalised, will see M7 secure ownership of the Nutley and AIG buildings on Dublin’s Merrion Road for around €15 million.

The company’s purchase of the Sandyford Business Centre portfolio gives it control of five of the scheme’s 10 units along with an associated provision of 200 car parking spaces. The portfolio’s office accommodation covers a combined area of 4,532sq m (48,786sq ft) and is producing annual rental income of €1,192,578 with a weighted average unexpired lease term of 5.8 years, with breaks at 4.6 years.

In the case of the Nutley and AIG buildings meanwhile, M7 is set to secure ownership of two office blocks comprising an overall floor area of 4,016sq m (43,235sq ft) along with 83 under croft car parking spaces. Developed in the late 1980s as part of the wider Merrion Shopping Centre scheme, the subject property is currently generating total rental income of €1,439,932 per annum.

In August, the company paid €6.25 million for the former Kildare headquarter office and distribution facility of convenience store operator ADM Londis, while last January it acquired the Primeside Park industrial estate in Dublin for €6.75 million.

The group also controls the Century Business Park in Finglas, which it acquired for €4.47 million last September, and the Westlink industrial estate in Dublin 10, which is bought for €13,870,000 in 2018.

Its first investment here came in 2017 when it bought Fumbally Lane, a combined office and residential development in Dublin 8 which was on the market for €24 million. M7 sold Fumbally Lane to BCP Asset Management in 2018 for €33.5 million, following the completion of a comprehensive asset management programme which enabled the property’s vacancy rate to plummet from 17 per cent to 2 per cent through the addition of 19 new tenants, and its annual rental income grow by €1.14 million.

M7 operates across 14 countries. It manages a portfolio of about 835 retail, office and industrial assets with a value of about €5.1 billion.