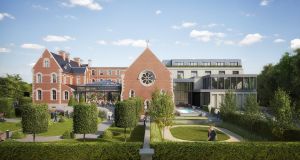 A leading Munster-based hotel group has secured approval for the construction of a €50 million five-star hotel on the site of a former seminary in the Dublin suburb of Donnybrook following a successful appeal to An Bord Pleanála.

The board reversed a decision of Dublin City Council to refuse planning permission to hoteliers, Joe and Margaret Scally, for a new 169-bedroom hotel on the site of the former St Mary’s College on Bloomfield Avenue in Donnybrook.

It also rejected the advice of its own planning inspector who recommended that the project should not be allowed to proceed.

The proposed Donnybrook Hotel represents the first entry into the Dublin market for the Scallys, who own the Hayfield Family Collection which includes the five-star Hayfield Manor Hotel in Cork as well as the Killarney Royal Hotel and the Great Southern Hotel in Killarney.

The couple plan to convert and extend the former Carmelite seminary, which is a protected structure, into a luxury hotel complete with spa facility including indoor and outdoor swimming pools as well as steel and glass orangery which would include a tea room and outdoor terrace.

An Bord Pleanála said it was satisfied that the hotel, subject to compliance with a number of planning conditions, would constitute an acceptable quantum of development in an accessible urban location.

On the contrary, the board said the hotel would ensure the viability and integrity of the protected structure into the future.

The Scally family bought the property, which is adjacent to the Royal Hospital Donnybrook, for just under €16 million in early 2018 although the original guide price when it first came on the market the previous year was only €10 million.

The Scallys, who submitted revised plans to An Bord Pleanála with increased open space and fewer internal roads, said the council’s decision to refuse them planning permission was unexpected as they had engaged in extensive pre-application consultations with city planners.

Dublin City Council had refused planning permission for the hotel on the basis it did not meet the zoning objective of the 1.2 hectare site, which was to set aside 25 per cent of the land for open space and/or community facilities, as well as concerns about the height of the development and loss of mature trees.

An inspector with An Bord Pleanála also recommended rejection of the plans on the basis they represented “substandard overdevelopment lacking in a satisfactory quantum of open space of adequate quality on a confined and sensitive site”.

However, the board said it did not accept the inspector’s recommendation as it believed the development would constitute “a sensitive and well calibrated design response to the site constraints”.

It acknowledged the inspector’s concerns about the construction of a basement and its potential impact on the protected structure but said it was satisfied it was sufficiently removed from the former college.

The development is being supported by Fáilte Ireland which said the proposed hotel would be a valuable addition to the accommodation stock in Dublin and would go some way to addressing the shortage of tourist beds in the city.

The former college, which was designed in a Gothic Revival style by WH Byrne, dates from 1888 and was extended at various times up to the 1940s by the Discalced Carmelites to cater for more than 40 seminarians.