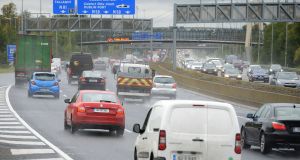 Yew Grove Reit said it will focus on properties in Dublin city and as far as a 30-minute commute of the M50 motorway (above), other major regional towns and cities, and IDA business and technology parks. Photograph: Dave Meehan

UK-based Peak Capital Partners has lined up Barry O’Dowd, a senior IDA Ireland executive who is set to retire from the agency, to chair a new Irish real-estate investment trust that is preparing to float in Dublin and London this month.

A company called Yew Grove Reit announced on Thursday that it was planning an initial public offering with a portfolio of 10 properties, valued at €25.9 million. The Reit said that it aimed to use proceeds from the IPO mainly to buy office and industrial assets let to Irish state entities, IDA-supported companies and large corporates.

The company will focus on properties in Dublin city and as far as a 30-minute commute of the M50 motorway, other major regional towns and cities, and IDA business and technology parks, it said.

The Sunday Business Post reported over the weekend that Yew Grove planned to raise €100 million in the IPO. It would be the fourth Reit to float in Dublin since the enactment in 2013 of legislation for such trusts.

Another vehicle, called Core Industrial Reit, postponed plans to list on the stock market earlier this year, while US private equity giant Oaktree is preparing the IPO of a retail-focused Reit attached to property, including a majority stake in The Square, Tallaght, managed by Sigma Retail Partners.

Mr O’Dowd, emerging business director with the IDA, is set to retire from the agency in the coming weeks as he prepares to become chairman of Yew Grove Reit, according to sources.

Mr Laredo, a former executive with investment banks including UBS, Bear Stearns and JP Morgan who co-founded Peak Capital Advisors in 2011, is listed as 100 per cent owner of existing shares in Yew Grove, before fresh money is raised as part of the IPO.

Mr Laredo didn’t respond to a phone call or email from The Irish Times on Thursday.

Yew Grove, advised by Investec in Dublin, plans to list on the junior markets in Dublin and London at the end of May. The initial portfolio is expected to have an initial rental yield of about 10 per cent, while the trust aims to pay an initial 7 per cent dividend yield, based on a €1 issue price for each of the new shares.