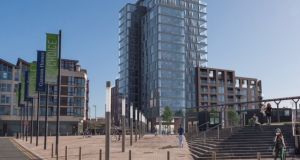 CGI of the proposed apartment building in Clongriffin

Further development of a new town at Clongriffin in north Dublin is to proceed following the granting of planning permission for a landmark 16-storey apartment building on the edge of the town square.

An Bord Pleanála has granted permission for the next phase, which will include 139 apartments in a managed complex. The facilities will include a concierge service, gym, residents lounges and extensive new roof gardens.

Gannon Homes invested heavily before the property crash in delivering the new town centre and the infrastructure for the residential community between the Malahide Road and Baldoyle.

Clongriffin has its own Dart station – the journey to Connolly Station takes about 17minutes – as well as a 500-space park-and-ride facility under the town square. There is also a 700-space, multistorey car park.

The design of the apartment block by Conroy Crowe Kelly Architects and Urban Designers provides for a 16-storey glass and metal tower rising over Station Square and flanking the stepped pedestrian street up to the Dart station. A landscaped entrance courtyard will be surrounded by brick apartment buildings accessed in a Continental style from the main square.

The planned apartment block will have resident lounges on the seventh floor opening on to an extensive roof garden with views towards the coastline and over a good part of the city. The apartments located between the seventh and 16th floors will have spectacular views in all directions from the Mourne Mountains to the Irish Sea and on to the Wicklow Mountains.

Clongriffin has been designed as a new town with an anticipated 3,600 homes once complete. It is already halfway there. A main street with shops and supermarket was provided from the start but full occupancy was delayed as a result of the economic crash. House building recommenced in the past few years and the remaining shops, cafes and supermarket are now moving towards occupancy.

The main street is bookended by Station Square and the Dart at one end and the Father Collins Park at the other. There are also plans to link the town with the Baldoyle nature park by way of a pedestrian walk and a cycle greenway running to the coast.

1 Tobacco makers still trying to make a mint from Irish menthol market
2 Household savings soar as consumers stop spending
3 ‘The recovery needs to be a full-scale economic renewal’
4 Ryanair expects air fares to fall when flights take off again
5 Coronavirus: Technopath offers employers not-for-profit antibody tests
6 Irish business of Carluccio’s restaurants to be wound up
7 Ireland stands to benefit in a big way from investing in public transport
8 Tax and the Pandemic Unemployment Payment: Your questions answered
9 Brown Thomas and Arnotts shoppers will be able to book time slots for entry
10 Elon Musk’s Starlink could take wonders of night sky away from us
Real news has value SUBSCRIBE