Kennedy Wilson owns €1bn worth of property including Shelbourne Hotel 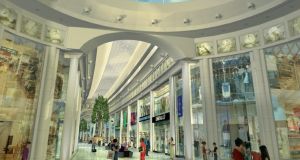 Kennedy Wilson owns €1 billion worth of propert in the Republic including Marshes Shopping Centre in Dundalk, Co Louth.

The value of seven high-profile Irish properties owned by Kennedy Wilson has grown by €54 million since it started buying the assets five years ago.

Kennedy Wilson owns €1 billion worth of commercial and residential property in the Republic, including Bank of Ireland’s headquarters and the Stillorgan shopping centre.

The company has just completed a €284 million deal with its lender, Bank of Ireland, that it said released €54 million of equity on seven of its Irish properties.

This means that the value of the seven properties, which Kennedy Wilson first started buying in 2012, has grown by €54 million over that time.

The properties included Bank of Ireland’s offices on Mespil Road in Dublin and the Stillorgan mall on the capital’s southside.

The others were the Marshes Shopping Centre in Dundalk, the Alto Vetro apartment block in Dublin, and three office buildings in the capital, South Bank House on Barrow Street, home to lawyers Mason Hayes Curran, Russell Court on Stephen’s Green and the Warehouse, also on the southside.

Kennedy Wilson refinanced €284 million in mortgages secured on these buildings, that is, it repaid the debt with a new loan from Bank of Ireland on which it will pay less interest.

The company would not say how much less interest it would pay on the refinanced debt. Ms Ricks noted that refinancing helped lower the company’s borrowing costs.

Kennedy Wilson also owns the landmark Shelbourne Hotel and a range of apartment blocks in Dublin. It is investing in extending and refurbishing many of the properties it bought here.

The group first entered the Republic’s property market in 2011 by buying Bank of Ireland’s property business and spent the next three years acquiring assets. It bought the Stillorgan mall in 2012.