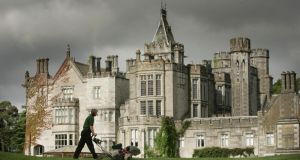 In Limerick, the reopening of Adare Manor is expected to contribute enormously to tourism in the county. Photograph: Alan Betson

Dublin hotels have had another bumper year, with occupancy rates running at about 82 per cent and average room rates of €129 per night. In many cases investors are beginning to benefit for the first time. New builds are racing ahead in Dublin, Belfast and Cork.

Irish Hotels Federation chief executive Tim Fenn says that while it has been a good year for hoteliers there were still pockets around the country where business could have been better. The Wild Atlantic Way and Ireland’s Ancient East had made significant contributions to business, but middle Ireland still has a long way to go.

The only hotel to open in Dublin this year was the Address at Amiens Street, which is part of the McGettigan Hotel Group. The 200-bed hotel is a four-star property built on the former car park of the North Star Hotel. The other McGettigan hotel in Dublin was renamed the Bonnington Hotel and is undergoing a major refurbishment.

In Limerick, the reopening of Adare Manor is expected to contribute enormously to tourism in the county, especially next spring when its exclusive golf course reopens.

Eighteen hotels valued at nearly €75 million were sold in the Republic during the first six months of 2017. In the previous year, 29 hotels were sold in the same six-month period for €136 million.

The biggest sale in the west of Ireland was the 261-bedroom Radisson Galway, which was sold to the John Malone MHL Group for €50 million. Sales during the year included the Mount Wolseley Golf Hotel in Carlow, which was bought by an Austrian investor for €14.25 million. Jacobs Inn Hostel in Dublin was sold for a similar amount. The Camden de Luxe in Dublin’s Camden Street made more than €8 million and Lynams on O’Connell Street sold for €6 million.

Sales are up in the past week, with the sale of Carton House to John Mullen for €57 million and Knightsbrook in Trim for €17.55 million. “There were plenty of smaller sales around the country, but less than in previous year,” said Tom Barrett of Savills.

It is expected that the sale of the Gibson, with a price tag of €87 million, will be completed by the end of the year. In the meantime, competition regulators are to scrutinise German group Dekabank’s takeover of the Gibson Hotel because it already owns one of the city’s largest hotels, the Clayton Burlington Road.

Dublin city is overrun with new builds, with companies such as Dalata getting ready to open a new Clayton Hotel on the banks of the Grand Canal and a Maldron in Kevin Street next year. Starwood’s first entry into the Irish market will be with the Aloft brand, a 263-room loft-style hotel in the Tenters area of the city.

Pressup Group will add to their hotel portfolio with the expected opening of the Devlin, a 41-room hotel in Ranelagh, and two other hotels in the pipeline in the north docklands. Tom Barrett reports that 12 of the cranes on the skyline in Dublin are involved in hotel developments. Last year it would have been office buildings.

In Northern Ireland, the hotel sector remains buoyant and bullish. Belfast has experienced the strongest growth in terms of occupancy and average daily rate. Since the start of the year, Belfast hotels have seen their average daily rate jump by 14.1 per cent – significantly ahead of the UK average increase of 4.7 per cent.

Two landmark hotels opened in the city during the year: the Bullitt, a boutique hotel owned by Beannchor, and the stylish Titanic Hotel in the Titanic Quarter. There are plans for a Bullitt Hotel in Dublin on Capel Street. Beannchor purchased 133-134 Capel Street, former offices of the Riverdance group.

Next year new Belfast hotels will open with international brands such as the AC by Marriott Hotel and Hampton by Hilton. Hastings Hotel will open the largest hotel in Northern Ireland, Grand Central, with more than 300 rooms. Dalata will launch its fourth hotel in the North with the Maldron Belfast City in the spring. The Belfast hotel industry will have close to 5,000 bedrooms by the end of 2018.

In Cork, work has begun on the planned new Maldron Hotel, to be located on the block bounded by the South Mall, Parnell Place, Oliver Plunkett Street and Beasley Street. The site has lain idle for many years.

Bam Property Ltd was originally given the go-ahead in 2009 for a significant office development and a 183-bed hotel after it acquired the site from the Revenue Commissioners in 2006. However, the decade-long financial and construction downturn meant the site remained undeveloped until now. Plans have been modified to allow for 220 rooms.

Planning decisions are currently awaited for a floating hotel to be docked at Penrose Quay, a major extension to the Metropole Hotel and a new hotel and office development on Horgan’s Quay.

A project that did not go ahead this year is the 402-room hotel at Dublin Airport, where the tender was withdrawn. The airport is looking at options for the development of a hotel on the site, but there is little progress so far.