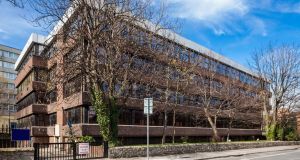 Former five-storey office block Burlington House on Burlington Road, which was demolished to make way for a new block. 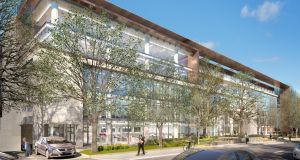 A computer generated image of the Dublin site after it has been redeveloped. Known as the Vertium building, it has been let to Amazon.

Dublin’s office landscape is in the process of a transformation with 26 office blocks demolished and replaced since 2014, according to a new report from Savills Ireland.

The location and quality of workplaces are “increasingly becoming part of the HR pitch” to prospective employees, the property agents said.

“As new office supply continues to come on stream, occupiers will have a greater choice of buildings. Therefore location, design and the internal functionality of space will exert a greater influence on occupancy levels and the pricing of leased office space in the coming years.”

The average age of the demolished blocks is a little more than 40 years, compared to an average of 22 years for all office buildings in the city.

The redevelopments have been focused almost exclusively on the city centre, with 21 projects in Dublin 2, four in Dublin 4 and one at Dublin Airport, Savills said.

John McCartney, director of research at Savills Ireland, said the higher density office development would improve the efficiency and sustainability of Dublin as a business location and allow more people to benefit from Dublin’s public transport links, which he described as the best in Ireland.

Three city centre offices have been converted to alternative uses since 2014. These include Findlater House on O’Connell Street and Pinebrook House on Harcourt Street, both of which are now hotels.

Oisín House on Pearse Street – a dated office block from 1973 – is now being redeveloped for student housing and two further buildings (Creation House on Grafton Street and 10-12 Trinity Street) have had their first-floor offices converted to retail use.

The vacancy rate for Dublin offices stands at 9.3 per cent, Savills said, while rents are rising by about 5 per cent year-on-year. Further rental growth is expected over the next two years but at a slowing rate as supply begins to catch up with the backlog of demand.

1 Flights abroad ban could last all summer
2 How much do Irish people earn? And what will Covid-19 do to our wages?
3 Economic self-harm is at the root of populism
4 Why are markets booming when a crash is on the way?
5 Columbia Sportswear defies gloom with first Irish standalone shop
6 Nine more suing INM and Leslie Buckley over alleged data hacking
7 Sharp fall in home sales in April as analysts warn of worse to come
8 Ireland faces 'deep downturn' this year and may not rebound until 2024 if there is a second wave
9 Second Covid-19 outbreak and no-deal Brexit an appalling vista
10 European shares in positive territory despite Italian banks
Real news has value SUBSCRIBE