Irish investors muscled past foreign investors in the 3rd quarter 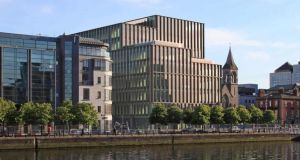 The largest commercial property transaction of the year in the State was the forward funding by Irish Life of the €126.3 million construction of a new headquarters for Grant Thornton at City Quay in Dublin.

The commercial property market is thriving again. After almost a decade of dealing with distressed debts, excessive borrowing and a defective banking system, a great many property funds are now benefiting greatly from rising property prices, offering attractive growth and decent yields, with many swelling into multimillion-euro portfolios.

Bill Nowlan, a property expert and one of the founders of Hibernia Reit, sees 2017 as “the first year in almost a decade when the commercial property emergency services have not been fighting fires”. He says the backlog from the economic crash of distressed property situations has largely been cleared. Equity funding has taken back its rightful place as the driver of the industry as opposed to excessive bank borrowings. “Commercial property values are now at realistic levels that balance supply and demand.”

Nowlan, whose latest project includes the setting up of a social and affordable housing fund, Urbeo, says the construction industry has bounced back much more quickly than he thought possible and, based on all available metrics, including both formal and informal employment levels and the number of cranes in Dublin’s skyline, now showed the industry was in rude good health.

One of the knock-on effects of the long-running crisis has led to many of our best investment properties becoming internationalised for the first time. Any number of Irish shopping centres, office blocks, hotels and student residences now figure prominently in overseas property funds and stock-market portfolios as well as private funds held by wealthy families.

American investors in particular have availed of a strong US dollar to pick up heavily discounted shopping centres and the latest designs in office buildings, which are frequently rented by familiar US high tech companies.

The €15.8 billion spent on Irish property investments between 2013 and the end of September last included €7.8 billion from overseas investors. And, as you might expect, the Americans accounted for most (62 per cent) of the overseas spend, according to researchers from Cushman & Wakefield.

However, US dominance of the top end of the investment market is now rapidly running out of steam because of the scarcity of international-style assets with the potential to handle rent increases.

This was one reason why US equity group Oaktree moved swiftly two weeks ago to outbid a handful of foreign funds and buy a controlling interest in The Square shopping centre in Tallaght for close to €250 million.

Last year, the US investment firm Blackstone acquired the underdeveloped Blanchardstown Shopping Centre from Green Property for more than €945 million. Close by in west Dublin, the German public pension fund Bayerische Versorgungskammer snapped up Liffey Valley, where once again there is scope to enlarge and upgrade the shopping centre and increase the rent roll – currently running at just under €14 million.

The increased level of activity by Irish buyers this year is largely attributable to the buying capacity of Irish Life and a number of small and medium-sized funds supported by AIB, Bank of Ireland, Ulster Bank and overseas capital. The result is that for the first time in nine years most of the investment acquisitions in the third quarter ( 63 per cent) ended up with Irish investors.

The largest transaction of the year was the forward funding by Irish Life of the €126.3 million construction of a substantial new headquarters for Grant Thornton at City Quay in Dublin city centre.

Irish Life also figured in the third largest property deal of the year, buying AIB’s principal branch office fronting on to both Grafton Street and Wicklow Street in Dublin city centre for €50.1 million. The bank premises previously changed hands in 2010 when it was bought at the height of the property crash by German fund GLL Real Estate for a mere €28 million.

The ongoing sale of The Square in Tallaght and several other high-value properties is expected to mean that the investment market in 2017 should exceed its 10-year average of €1.8 billion. CBRE says the likely outcome for 2017 will be in the order of €2.5 billion but, with several large transactions ongoing, some will be completed before the year’s end and others may fall into 2018.

The higher than expected turnover has been influenced to a considerable extent by a relatively new asset class in Ireland: the multifamily residential investment sector, which has recorded a turnover of no less than €426 million since the start of 2016. Agent Hooke & MacDonald has monitored 20 significant multifamily property sales over the past two years and expects the overall turnover to reach €500 million by year end.

The highlight of this new market has been the forward sale by the Cosgrave Group of the yet-to-be-built, 319-unit Charlotte apartment block at Honeypark in Dún Laoghaire to a German fund for €132 million. The gross yield will be 5.68 per cent.

With high-quality commercial investments increasingly difficult to source, some of the best-known funds (including Irish Life) are expected to move into this new residential territory in the coming year.

This move could not be better timed as it is happening just as the main area of concern is the residential sector, where a lack of supply is causing acute problems, particularly in terms of affordable rental accommodation in Dublin.