Freehold interest in Moore Street butchers for sale for €650,000

FX Buckley's has been in historical area since 1930s and will show initial yield of 4.96% 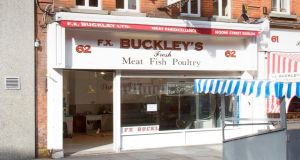 In a rare enough sale of a business premises on Dublin’s Moore Street, Colliers International is guiding €650,000 for the freehold interest in FX Buckley's butchers shop at 62 Moore Street.

The mid-terrace, three-storey, over-basement building is located only 30m from Henry Street and adjoins the Wallis store at 5 Henry Street.

The location is renowned for its old fruit and vegetable market and historical buildings linked to the 1916 Rising. The area is to be enhanced by the future redevelopment of the Dublin Central site bounded by Moore Street, Henry Street, O’Connell Street and Parnell Street, now owned by Hammerson, who also run the Dundrum Town Centre.

Mandy Daly of Colliers says the sales opportunity will appeal to surrounding occupiers and private investors looking for a prime city centre retail location a stone’s throw from Henry Street. The guide price would show a net initial yield of 4.96 per cent after allowing for standard acquisition costs of 8.46 per cent.

FX Buckley's is also close to Arnotts, now owned by the Selfridges Group and due to be upgraded shortly.