More than 70 homes in Dublin docklands on sale for €52.5m

The apartments are located in Sir John Rogerson’s Quay site 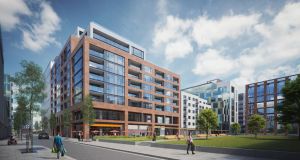 Another block of apartments under construction in the Dublin docklands is to be offered for sale by private treaty. Selling agents Savills and Owen Reilly are quoting a guide price of €52.5 million for 72 homes at Sir John Rogerson’s Quay in the south docklands which will be ready to move into in the first three months of 2020.

The apartments are to be located in an 11-storey-over-basement building which will form part of an extensive office and residential development planned for 76 Sir John Rogerson’s Quay by Targeted Investment Opportunities, an umbrella fund involving Los Angeles-based Oaktree Capital, Bennett Construction and Nama.

The consortium estimates the new block will have a rental value of about €2.9 million from 14 one-bedroom apartments, 43 two-bedroom homes and 15 three-bedroom units.

In addition to the apartments, the planned Benson Building will have two ground floor retail units as well as accommodation for a gym or a recreational room. Concierge facilities will also be provided as well as underground parking for 72 cars.

Moreover, while the pipeline for new office space has the potential for a further 11,000 office workers, only 665 new apartments, including those under construction in the Benson Building, are presently in the pre-planning, planning or construction phases.

Apartment rents in the docklands rose by 10.8 per cent in 2017 and showed a further growth of 5 per cent in the first six months of this year. These increases were considerably stronger than in the Dublin market as a whole.

Fergus O’Farrell of Savills has described the forthcoming sale of the apartment block as “a “rare opportunity to acquire one of only a few private rented sector schemes in the Dublin dockland”.

Owen Reilly said the imbalance between residential units and office space in a neighbourhood where multinational employers were constantly expanding and hiring young professional workers, frequently from abroad, created a compelling case for strong rental demand into the future. He described Grand Canal Dock as Dublin’s strongest rental market.