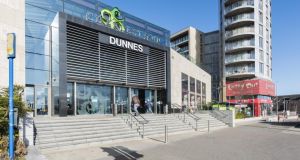 Charlestown Shopping Centre in north Dublin has the benefit of a current grant of planning permission for 247 apartments on adjoining land.

Businessman Eamon Watters, owner of Panda Waste, one of Ireland’s largest waste collection and recycling companies, has acquired a substantial stake in Charlestown Shopping Centre at junction five of the M50 in north Dublin. The acquisition was made through an investment vehicle called Garristown Venture Holdings.

The large-scale shopping centre and an adjoining site with planning permission for 247 apartments and further retail space have been sold for slightly over €42 million, well ahead of the €35.5 million quoted by selling agents Bannon and Savills.

Garristown Venture Holdings is owned and controlled by Ronan Barrett, a Dublin-based businessman who is originally from Co Tyrone. Mr Barrett confirmed that it is funding the acquisition through a combination of equity capital from Citadel’s institutional and private clients and senior and mezzanine debt funding from AIB and Cardinal Capital. Mr Watters is thought to be the primary client in the Citadel entity.

Charlestown is a well-established district shopping centre developed by brothers Michael and Tom Bailey and now under the control of the National Asset Management Agency.

Michael Bailey is a near neighbour of Mr Watters close to the village of Beauparc in Co Meath.

Panda is the largest exporter of recycled materials in Ireland and employs more than 650 people.

Garristown has confirmed that it is at an advanced stage of discussions with a number of prospective tenants for Charlestown, which will see the delivery of new letting and services including a TGI restaurant, a creche and a gym – which will bring the centre to 100 per cent occupancy.

The centre has the benefit of a current grant of planning permission for 247 apartments on adjoining lands.

The new owners are in advanced discussions with John Paul Construction about the commencement of residential development on the site in the fourth quarter of this year.

Garristown says the adjoining land has the capacity to accommodation more than 400 apartments based on the revised density and height guidelines.

More than 75 per cent of the rental income comes from 10 tenants in a scheme which has an occupancy rate of 91 per cent. Charlestown is anchored by Dunnes Stores, which owns its supermarket extending to 6,500sq m (70,000sq ft).

A good proportion of the weekly average footfall of 54,000 is generated by the free access to a 1,350-space underground car park.