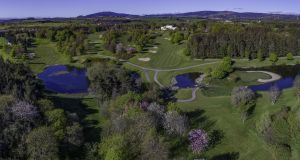 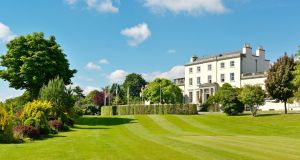 One of Ireland’s most prestigious golf venues, Druids Glen Hotel & Golf Resort at Newtownmountkennedy, Co Wicklow, is for sale from today on the international market.

Tom Barrett of Savills hotels and leisure division is quoting €45 million for the five-star resort, which includes a 145-bedroom hotel and a 349-acre estate with two 18-hole championship golf courses.

The announcement of the sale comes two months after Michael Smurfit’s K Club in Co Kildare was also offered for sale at more than €80 million. The selling campaign has already attracted more than 100 inquiries, most of them from American and Asian business interests.

The first 18-hole golf course in Wicklow was designed by Pat Ruddy and hosted the Irish Open for four years after opening in 1996. In 2002 it staged the Seve Trophy, a biennial competition where Ireland and Britain’s top professional male golfers take on the Continent’s top players. The second 18-hole course, Druids Heath, was designed by former Irish golfer Tom Craddock.

The resort is located in stunning, mature woodland nestling between the Wicklow mountains and the Irish Sea. It is a short distance from the N11, which links up with the M50, providing easy access to Dublin city centre and Dublin Airport.

The resort is owned by the Flinn, Lappin and Hurley families and has 650 members who pay an annual subscription of €2,800.

Druids Glen’s main golf course was briefly placed in examinership in 2016 when its owners sought High Court protection in a dispute over a €4.85 million loan acquired some years earlier from Anglo Irish Bank.

The five-star hotel traded as a Marriott resort when it first opened in 2002. It has 145 air-conditioned bedrooms and suites as well as a spa and health club, eight conference and event rooms, and a restaurant that can seat up to 160. A relatively new function room overlooking the golf course can accommodate 400.

The hotel has undergone considerable refurbishment in the past four years and is free of brand or management agreements.

The clubhouse, known as Woodstock House, is one of the highlights. It was built in 1770 by the family of the Earl of Aldborough and was used at one stage as a writing and recording base by musicians such as Mike Oldfield (famous for Tubular Bells), Rod Stewart, Steve Winwood and Jim Capaldi.

Edward Stephenson, chief executive of the golf resort, said the business had grown year on year and now catered to more than 130,000 Irish and overseas golfers.

Tom Barrett described the golf resort as “one of the jewels in the Irish hospitality sector”. He said Dublin city was growing fast in terms of offices, housing and hotels. This was now leading to an increased demand for out-of-town leisure breaks and midweek corporate meetings, but there was no sign of further resort hotels being built for this market.