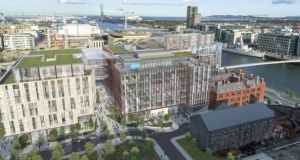 Developer Johnny Ronan’s bid to increase the height of Salesforce’s new European headquarters at Spencer Dock has been rejected for a second time by Dublin City Council.

While Mr Ronan’s Spencer Place Development Company (SPDC) had hoped to secure permission for an additional two floors at the scheme through the submission of a new planning application under a different schedule within the Strategic Development Zone (SDZ) guidelines, the council’s planners firmly rejected the proposal.

Referring to the developer’s application to increase the height of the blocks at Station Square, the council said in its determination that the proposed additional storeys “would not be consistent with the provisions of the [North Lotts and Grand Canal Dock SDZ] planning scheme”.

Commenting further on their decision, the city’s planners said the proposed addition of the two floors at Spencer Place would “ be unduly dominant and visually incongruous when viewed in the context of the existing quayscape on North Wall Quay, a conservation area, and the surrounding built environment”.

The council added that the proposal would “ adversely impact on the setting of the former London and Northwestern Hotel, a protected structure, and other buildings of historic interest in the vicinity” of the Spencer Place campus, and “would present an unduly monolithic appearance when viewed from the surrounding streets”.

Having considered SPDC’s latest application, the council said it “would not be consistent with the provisions of the [North Lotts and Grand Canal Dock SDZ] planning scheme, and would be contrary to the proper planning and sustainable development of the area”.

While efforts to contact Mr Ronan for comment on the matter proved unsuccessful, the council’s refusal of his company’s latest proposal for the Salesforce building is sure to be met with disappointment by the developer.

In seeking permission for the two extra floors, Mr Ronan has argued that the space would accommodate an additional 1,000 workers and increase the fees paid to CIÉ, which owns the site, by €20 million.

While it remains unclear what course of action, if any, he will pursue now in relation to his bid to increase the height of the Salesforce building, the developer took his fight to the High Court when the council rejected his company’s original planning application to add two floors to the scheme.

On that occasion, lawyers for his company argued that advice given by the council on the particular planning law governing height restrictions in the North Lotts SDZ was “incorrect as a matter of law”.

The permitted height for the Dublin tower is 39m. Mr Ronan’s company had sought to secure permission for two extra storeys at the project, following the implementation of new rules on building heights introduced by the Minister for Housing Eoghan Murphy last year.

The council previously said consideration of any additional building height could be considered only following a review of the SDZ.

But SPDC argued, for its part, that the implementation of such a review could take up to 18 months.

“The site is already under construction and the delay occasioned by this review will mean losing the opportunity to achieve greater heights, more residential units and more jobs,” the company said.