Overseas buyers the biggest players, accounting for close to 60% of spend, at over €700m 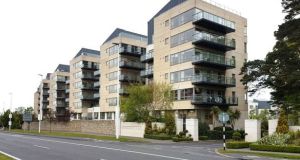 Included in the XVI portfolio were more than 100 apartments at Beechwood Court in Stillorgan.

The investment property market continued to perform strongly with total spend reaching €1.83 billion in the first half of the year, according to figures from Lisney.

The numbers show activity in the second quarter was more than double that in the first three months. Overall, spending totalled €1.22 billion in the April to June period.

The biannual figure is on a par with the same six months a year earlier and 30 per cent higher than in the first half of 2017.

Spending on investment property was biggest in the private rented sector, which accounted for 58 per cent of all turnover in the second quarter to €707.4 million across 11 deals.

The office segment was the second largest,with 25 per cent of total spend. Office sales totalled €303.8 million with an average lot size of almost €16 million.

Retail accounted for 12 per cent of investment sales, with mixed-use properties at 4 per cent and industrial at 1.4 per cent.

Investment spend was unsurprisingly highest in Dublin, which accounted for about 84 per cent of the total spend across 41 transactions.

The data shows international buyers continue to dominate the Irish market, accounting for close to 60 per cent of spend in the second quarter. The average lot size for international purchasers was €39.1 million.

There was a noticeable increase in off-market activity, which accounted for one-quarter of total spend and for two of the five largest transactions announced over the three months.

The purchase of the XVI portfolio of 815 homes in Dublin and Cork by Ires Reit represented the biggest deal at €285 million. This was followed by the €222 million paid by Henderson Park for the Heuston South quarter.

Some €1.2 billion worth of new supply came to market in the quarter, spread over 56 investment opportunities with a total of €1.33 billion worth of supply available to buy at the end of June.

Prime yields were unchanged apart from in the private rented sector, where pricing hardened by 20 basis points in the quarter.