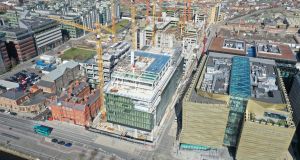 As part of the proposal, which it submitted last September, Mr Ronan’s company, Ronan Group Real Estate (RGRE) had sought to increase the building’s permitted height from nine to 13 storeys.

RGRE made its application for an additional four floors at the scheme following the rejection by city planners of its two earlier efforts to raise the building’s height from nine to 11 floors.

While the developer’s third and more ambitious proposal clearly flew in the face of the council’s previous decisions, RGRE, for its part, argued at the time that it was consistent with the local authority’s own recently revised recommendations for building heights in the North Lotts and Grand Canal Dock Strategic Development Zone (SDZ).

RGRE had hoped when it made its third application that the board would have given its approval to the revised height recommendations in advance of Dublin City Council’s latest decision. The proposed amendments to the SDZ Planning Scheme are however still awaiting a decision.

Commenting on Dublin City Council’s latest refusal, developer Johnny Ronan said: “This is one of the best-located sites in the country. It’s a 10-acre linear park on the banks of the River Liffey in the Dublin docklands connected by Luas and with a proposed underground rail station on the way, yet Salesforce Tower looks like it will be restricted to nine storeys.

“We’re considering making a fourth application but time is running out. Even if we got approval at the fourth time of asking, it might be too late for Salesforce. And if that’s the outcome, that will be 1,000 new jobs that won’t be created. This is a terrible result for Ireland as we cope with the economic fallout of the Covid-19 pandemic and the widespread job losses that are coming down the line. It’s incredible to think that Dublin City Council can stand in the way of 1,000 new jobs like this.”

Dublin City Council’s rejection of RGRE’s bid to increase the height of Salesforce Tower stands in contrast to the approval by An Bord Pleanála last December of the company’s plans for two residential blocks of 11 and 13 storeys respectively on the adjoining site at Spencer Place. RGRE has secured permission to develop 464 build-to-rent (BTR) apartments and 200 co-living bed spaces as part of the scheme.