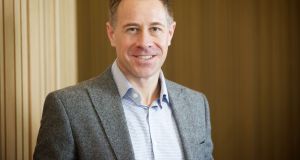 Simon Betty has been appointed to the newly created role of managing director city quarters and developments.

Dundrum Town Centre part-owner Hammerson has announced the appointment of Simon Betty to lead its move into residential development.

Mr Betty, who is its retail director for Ireland, has been appointed to the newly created role of managing director of city quarters and developments.

He will be responsible for driving the “city quarters” vision, which will see the group move beyond pure retail and into residential development.

In his new role, Mr Betty will continue to lead on Irish developments including Dublin central and future mixed-use regeneration at Dundrum and Swords Pavilions.

In Dublin, planning permission has been granted for more than 100 apartments at Dundrum Town Centre, marking Hammerson’s first move into residential development in Ireland.

Hammerson said the potential of city quarters was “significant” with both short and long-term opportunities and the ability to deliver up to 6,600 homes, 1,600 hotel rooms, nearly 300,000sq m of workspace alongside nine parks and exceptional public realm.

“Simon has been instrumental in establishing our presence in Ireland since we entered the market in 2015 and his experience across the business will be essential for the delivery phase of city quarters,” he said.

“The concept has already made great progress in the past 12 months, and this newly created role will build upon this success, ensuring it delivers value for both stakeholders and local communities.”

The search for Mr Betty’s successor in Ireland has begun, but he will retain his responsibilities for the Irish portfolio in the interim, according to the company.