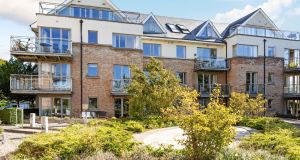 Portfolio comprises 19 of the 21 units in Block B at the Willows scheme off Claremont Road in Dublin 4.

Investors in Dublin’s private rented sector (PRS) market will be interested in a prime portfolio of 19 apartments which has been brought to the market by joint agents Hooke & MacDonald and Finnegan Menton at a guide price of €8 million.

Located within the Willows, an established scheme off Claremont Road in Sandymount, Dublin 4, the investment which is being sold on behalf of Gannon Homes, comprises 19 of the 21 apartments in Block B. The portfolio consists of one one-bedroom apartment (65sq m), 15 two-bedroom apartments (average 87sq m), and three three-bedroom penthouse apartments (average 149sq m). The apartments are well laid out and each has a good sized balcony/terrace. There is ample car parking at both surface and basement levels.

The passing rent (when one vacant show unit is let) is in the region of €465,000 per annum, while the reversionary income is estimated by the joint selling agents to come in at around €486,000 within 12 months, once rent reviews are completed. The tenants are not affected by the sale.

The guide price of €8 million represents a gross yield of approximately 6 per cent, which breaks back at an attractive price per unit of around €400,000 for the two-bedroom units and €550,000 for the three-bedroom penthouses. This represents a significant discount on similar properties in the area.

The Willows is a development of 42 apartments in two self-contained blocks overlooking the YMCA sports grounds off Claremont Road in Sandymount. Developed by Gannon Homes in 2006 on the grounds of the YMCA, it benefits from views over the cricket ground of the YMCA and from being set back in a private development off Claremont Road. The scheme is situated within a short walk of Sandymount village, the Aviva Stadium, and Facebook’s new EMEA campus, which is now under development on the site of AIB’s former Bank Centre headquarters in Ballsbridge.

9 Are you mad to keep your money in prize bonds?